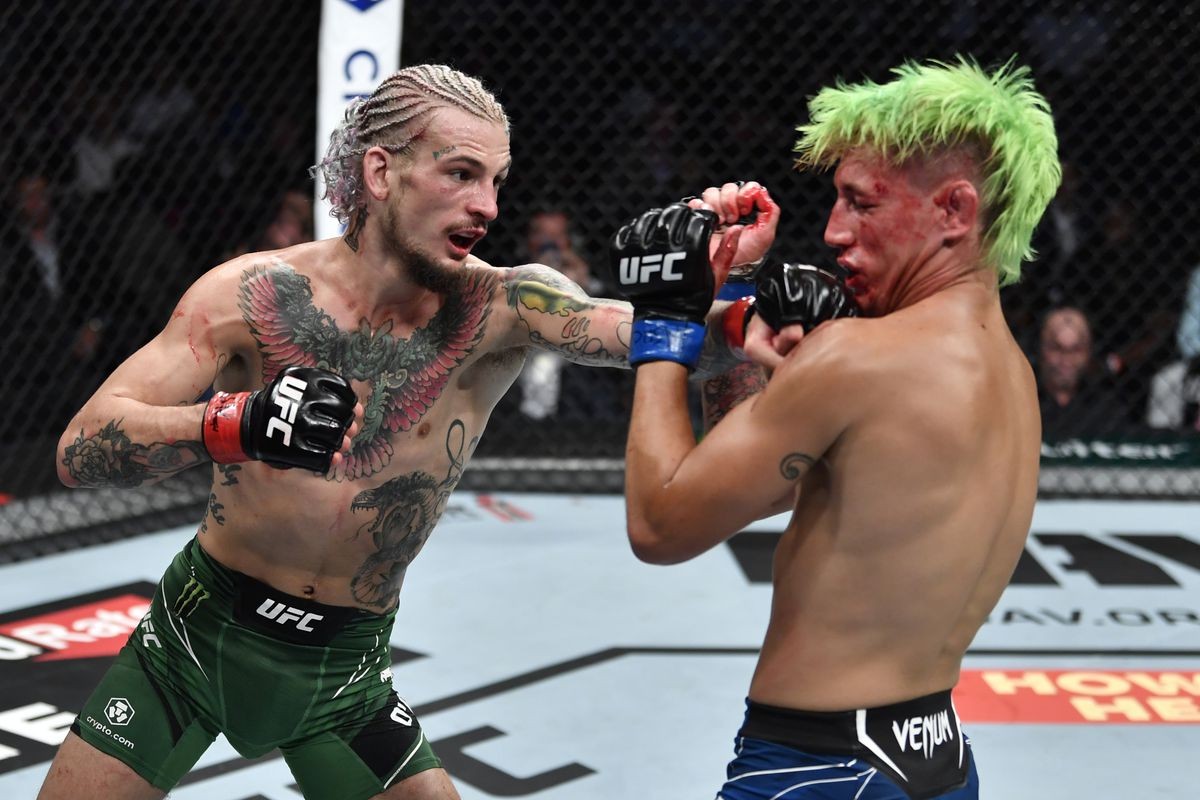 Kris Moutinho made his UFC debut on 11 days’ notice against Sean O’Malley at UFC 264. Moutinho looked like a smaller, younger Nate Diaz—feeding off his opponent’s precision strikes and lurching forward into power shots.

The event was headlined by the highly anticipated trilogy fight between Dustin Poirier and Conor McGregor. For its biggest card of the year so far, the UFC upped the ante with its post-fight bonus awards giving out $75,000 prizes instead of the customary $50,000 extra checks. According to various reports, Moutinho pocketed $10k as his guaranteed fight purse.

Being a heavy underdog he took the fight against Sean O’Malley, it was no surprise that O’Malley cruised past the young fighter. However, Moutinho fearlessly pushed the pace throughout despite eating absolute bombs from O’Malley. For 14 minutes, Moutinho took some of Sean’s best shots and continued to march forward, earning the nickname “Green Zombie.” Needless to say, it was his grit that won the hearts of fight fans around the world.

The former CES MMA fighter talked about how he got his matchup with ‘Sugar’ Sean O’Malley and other details about his time before the UFC. One reporter asked about his career plans. And if he is looking to end up like Conor McGregor, who started out broke and reached the top of the MMA world.

“I wasn’t broke,” Moutinho said. “I had a job where I was working 80 hours a week. And literally this beginning of June, I decided I’m done with this.”

When asked about his job, he stated that he used to work in a paint factory and found his purpose in MMA. He added, “The only thing I have ever been happy with is fighting and training.”

How Kris Moutinho achieved victory in defeat at UFC 264

In his UFC debut against Sean O’Malley, Kris Moutinho absorbed 230 significant strikes. The second most for a three-round fight in the franchise’s history. 177 of those shots were to the head. Mostly to Moutinho’s face, which during the fight was described by commentator Joe Rogan as “looking like roadkill.”

In the final 30 seconds, the two fighters opened up in a wild exchange that sent the crowd to their feet. But with just 27 seconds left in the fight, referee Herb Dean had seen enough. So he stepped in and stopped the fight.

The stoppage was met by mixed reactions. UFC commentator Joe Rogan, indicated on the broadcast that he did not agree with Dean’s decision-making to call the standing TKO.

Despite the loss, Moutinho likely picked up plenty of new fans for his ability to take punches and keep coming forward. He was so durable that even O’Malley said, “My hands hurt so bad from punching his face.”