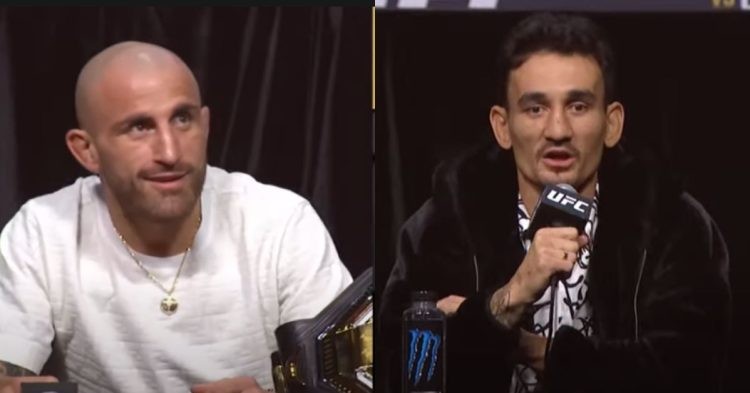 UFC 276 is right around the corner and fans couldn’t have been more excited. As exciting as the fights are going to be, fight fans had the chance to witness their favorite fighters face-to-face for the first time during the pre-fight press conference.

What followed was a vintage verbal back and forth between the Champions and challengers before they take each other head-on inside the Octagon this weekend. While relatively calm and composed, both Max Holloway and Alexander Volkanovski also had a thing or two to say about each other.

“All week, all I heard was damage. We are talking about Damage here. Damage this Damage that. I am known for taking damage and he is known for not giving it.” Holloway said.

Fight fans are aware Max Holloway has stopped sparring before his fights. This has often been compared to his incredible past few performances inside the Octagon. However, Volkanovski opined Holloway’s decision to not spar has a lot to do with the damage he continues to take in all his fights.

“We gonna see Saturday night, right! That’s the beauty of it. That’s why you can’t spar anymore cause you get punched and hit too much,” Volkanovski responded.

“UFC has been trying to ice my a**, putting me in cold places to fight. We back here in the 9th Island. The volcano is coming be ready brother.” Holloway said as the exchange continued.

Neither of the fighters is known for talking trash on the mic, but when the stakes are that high, it’s safe to say, getting a mental edge over your opponent is a great advantage.

Volkanovski and Holloway will share the Octagon for the third time as two of the greatest featherweights of all time step inside the cage once again in the co-main event of UFC 276.

Volkanovski has emerged victorious on both occasions the last two times he has shared the Octagon with Holloway, and the Aussie fighter will look to repeat the feat this weekend as well to put an end to his rivalry with the former featherweight champion.