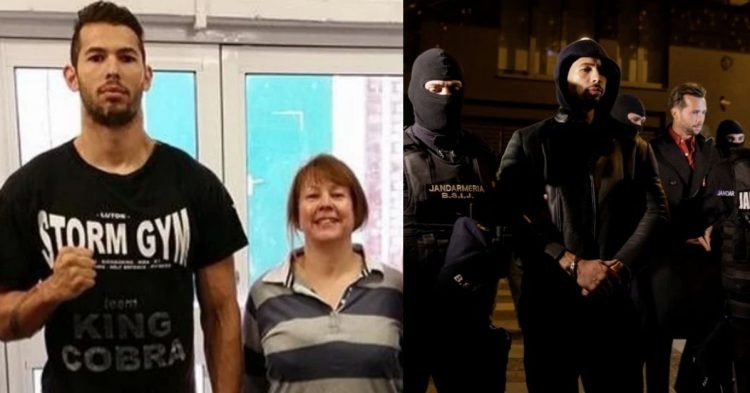 Andrew Tate with his mother, Eileen Tate (Credit: Teal Mango and The Guardian)

Andrew Tate, even in early 2023, continues to be the talk of the town. This time, his shocking arrest and feud with Greta Thunberg are the reason why. However, when he first went viral, it was because of Tate’s misogynistic rants or his talk about breaking the matrix. And it seems these actions have upset his mother.

As reported by the Sun and GeoTv, a family friend told MailOnline about what Andrew’s mother, Eileen Tate, thought about the things her son was saying online. The source said, “I don’t think she is happy with what Andrew says, the misogyny. She says he says these things for the response he gets – for the number of hits on the internet.” These statements by her are made worse by the Tate brothers’ arrest.

They were charged on suspicion of human trafficking, rape, and forming an organized crime group. The Romanian police also made it clear that the pizza box from the Greta Thunberg response video played no part in the arrest. The source also added, “He’s always going on about fast cars and what a man should be, but Eileen didn’t raise him like that.”

The Tates’ arrest divided the internet, as usual. His supporters still feel the matrix finally attacked him. On the other hand, the ones who initiated the outrage against Tate are reveling in him finally receiving his comeuppance. And seemingly, Tate’s mother finds herself agreeing more in with the latter group than the former.

The son of Emory Tate, an international chess master, and his wife Eileen, a catering assistant, Emory Andrew Tate III is the eldest of three. However, he prefers Andrew Tate or “Top G” as his moniker.

Tate has two younger siblings, his sister Janine and the man who frequently appears alongside Andrew, his brother Tristan. The former kickboxing world champion and his siblings were born in the US and raised in Chicago, Illinois, and Goshen, Indiana until their parents’ divorce.

Tate was 5 years old when learned to play chess and even went on to play in adult tournaments as a child.  Eileen then moved the brothers to England after she split up with Emory Tate Sr.

It was here where Tate started his kickboxing training in 2005. And here began the path that ended with Tate winning the world championship. And now he and his brother have amassed large fortunes for themselves. However, his recent arrest and the outrage caused by his words put a dampener on that.