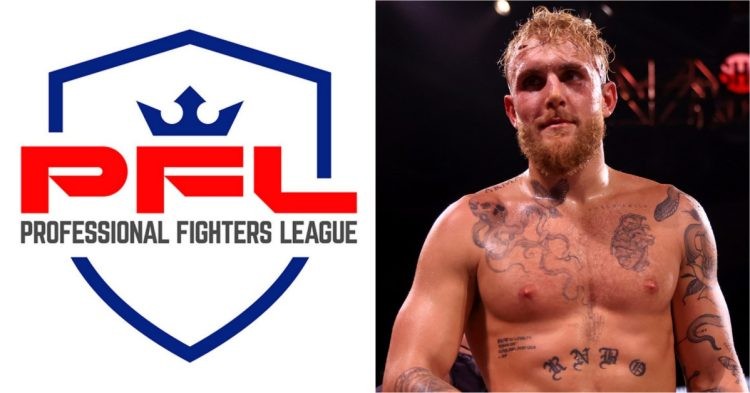 Jake Paul starts 2023 on a big note! While his elder brother is currently dealing with the alleged failure of his CrytoZoo project, Jake is about to start a whole new career! After creating havoc in the world of boxing, and making his WWE debut, Paul is about to begin a journey in MMA as well!

After achieving his dream of signing an NFL contract with the Cleveland Browns, Jake is about to change the landscape of MMA too! According to a report from The New York Times, Jake Paul has signed a multiyear contract with Professional Fighters League (PFL). The report suggests he is in talks for two fights in 2023.

While one will be a boxing bout, another will mark his debut in Mixed Martial Arts (MMA). He will reportedly fight in the newly founded “Super Fight” division of the promotion. However, that is not all, Jake will also be the “head of fighter advocacy.” Fans might wonder what that means. Apparently, he will be doing promotions for the company on his social media.

It is definitely a piece of significant news, as he has been on bad terms with UFC President Dana White. He has been a big advocate of better fighter pay in MMA. Jake was also interested in building a fighter’s union.

So he will finally have the chance to implement his ideas in PFL. In his interview with the NYT, Paul added, “This is about changing M.M.A., disrupting, innovating, and creating the next big league.”

Who will Jake Paul fight in PFL?

While there were rumors that The Problem Child would step into the MMA cage, nobody expected it to happen this soon. However, Paul is a man of many talents and he has the tendency to surprise his fans. But the big question is, who will Jake fight in the PFL? Jake is coming off a big win against former UFC middleweight champ Anderson Silva.

However, that was a boxing match and MMA is a different ball game entirely. For his bouts against Ben Askren, Tryon Woodley, and Anderson Silva, Paul weighed in at around 190 lbs. Particularly for the Silva fight, Jake was slightly over 185 lbs. Hence, in MMA, it would mean that Jake will fight in the middleweight division.

While BoxRec is reporting that Jake stands at 6’1, other reports indicate that he is around 5’11. The light heavyweight division in the PFL has 11 fighters under contract. Australian fighter Robert Wilkinson is the PFL light heavyweight champ. However, it is not likely that Jake goes after him right away. PFL is more likely to take the same road that it took with Claressa Shields.

While Jake is an excellent boxer, he is yet to prove himself on the mat. There is footage of Jake getting dominated on the mat by a professional MMA fighter. So it will be interesting to see which way Jake’s new adventure turns out.