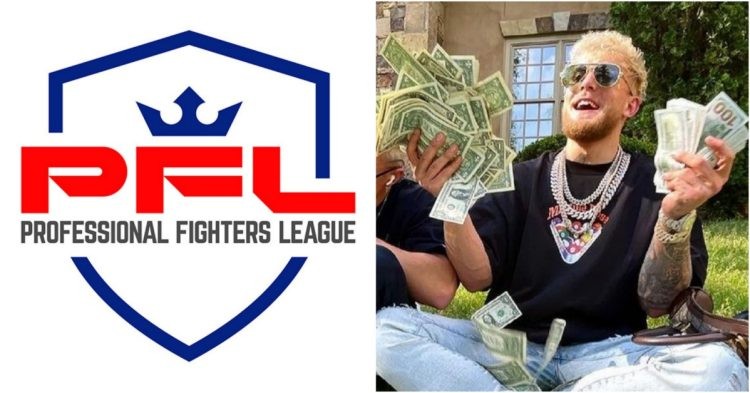 Jake Paul just broke the internet with his latest announcement. The Problem Child‘s run of dominance in the combat sports world is about to extend. After amassing a boxing record of 6-0, Jake is set to try out his hands in MMA as well. The New York Times first broke the news that Jake Paul has signed for PFL. It means that Jake will be making his MMA debut in 2023.

The report had some very interesting facts in it. It revealed that Jake will fight in the PPV division of PFL. Previously, the company did not have PPV cards. However, they changed it recently as the promotion plans on putting up big fights. While they already had Claressa Shields and Kayla Harrison, PFL needed another big name to launch the program properly.

Reportedly, Jake and his manager Nakisa Bidarian also own some equity shares in the company. However, there was no revelation as to how much money Jake Paul will earn from the deal exactly.

But, there is some insight into what percentage of the revenue Jake will earn from the fight. PFL will share 50% of its PPV revenues with the fighters. It is certainly a refreshing change from what the UFC does.

Jake Paul will be doing more than fighting for PFL

The Dana White-led company does not share anywhere near the revenue that the PFL is promising to do. Hence, joining PFL is also a wise move for Jake Paul financially as well. Jake is certainly a massive superstar, who is capable of selling a decent number of PPVs himself.

But, it is yet unknown if Jake’s salary will be purely based on the PPV sales, or if he will have any fixed amount of money on top of PPV points. On top of his fighting role, Jake will also serve as the “head of fighter advocacy.” The job includes the duty of promoting PFL events on his social media. It will be similar to his role for the NFL team Cleveland Browns.

It is not expected that Jake will take the path that any ordinary MMA fighter takes. Jake currently has a target of 2 fights in the promotion in 2023. He is expected to have one MMA fight and another bout in the boxing ring. The Problem Child having an MMA fight is a huge deal and it is expected to do great business. While there is no particular opponent in sight, he does have some options.

The most popular option available to him is Nate Diaz. Nate even hinted at a Jake Paul fight after his last UFC fight against Tony Ferguson at UFC 279. So Jake vs Nate, either in MMA or boxing, will be a big draw. So there is every chance that 2023 kicks off with a Paul vs Diaz mega event.

Another option that is less viable, is Dillon Danis. Danis was scheduled to fight against KSI on January 14th in London. But, he pulled out of the contest at the last moment. In a big coincidence, Jake Paul just announced his MMA debut. So the question that needs to be asked is, is Danis in line to welcome Jake to the world of MMA?

Jake’s bout against Anderson Sliva reportedly sold 200-300K PPVs. So, it remains to be seen how many PPVs buys his PFL events get. Depending on the correct opponent, Jake may be in line for some of the biggest paydays of his career. He has already earned a decent chunk of money in his boxing career. Fans can expect the same for his run in MMA as well.