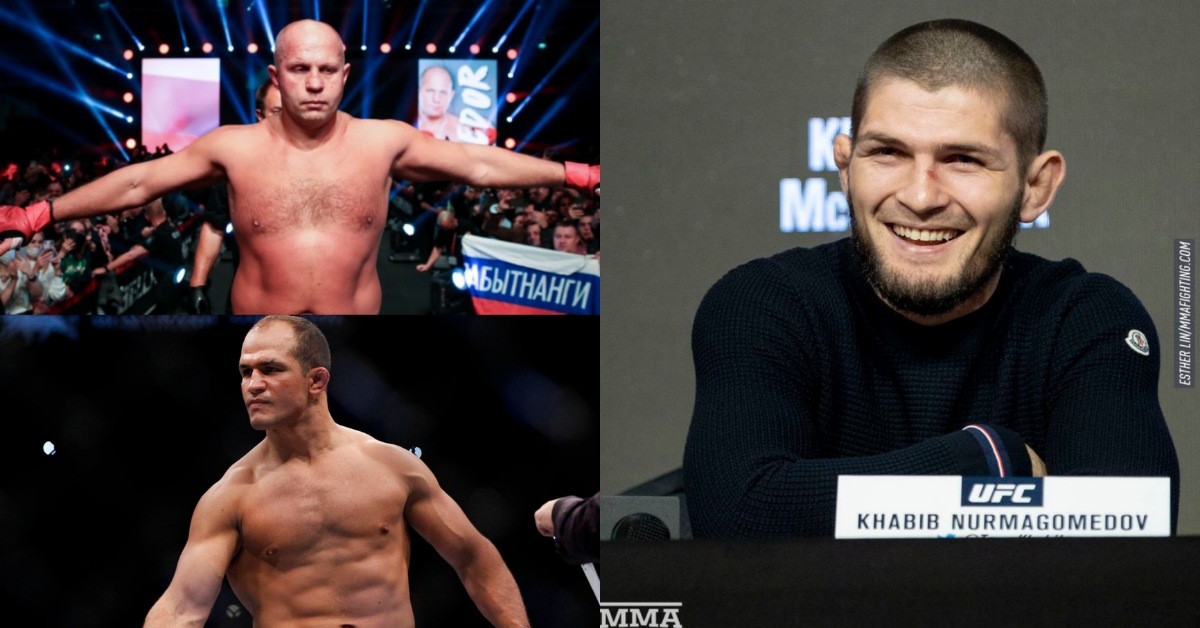 Khabib Nurmagomedov is looking to make a dream fight in co-promotion with Bellator. Speaking to ESPN journalist Brett Okamoto, Khabib revealed that he plans to book Junior Dos Santos vs Fedor Emelianenko in the near future. But all of it depends on the results of this weekend’s Eagle FC 47.

Junior Dos Santos will fight Yorgan De Castro this weekend at EFC 47. During the ESPN interview, Nurmagomedov stated that the winner of that fight has big things waiting for him. Khabib stated that De Castano will fight for the belt if he wins. But he has bigger plans if JDS gets the job done on Friday.

Eagle Fighting Championship is slowly becoming more and more popular with the fans. Nurmagomedov revealed that their last show attracted over 500,000 viewers. They have also signed superstars such as Kevin Lee and Diego Sanchez. With such encouraging numbers and an impressive roster, Khabib wants to take the promotion to the next level.

“I’m very exciting about the main event, you know. Yorgan De Castro vs Junior Dos Santos, the legend himself. If Yorgan win, he gonna fight for the title. If Junior Dos Santos win, we are gonna discuss with my friend Scott Coker (Bellator President), maybe they are gonna give us (the opportunity to) make (the) fight, Junior Dos Santos vs Fedor Emelianenko.”

The Eagle also revealed that there are three possible locations for the fight. He named Miami and Moscow, the first two locations. But Khabib also mentioned Jeddah as a third location as there is a strong interest from Saudi Arabia to host the event.

Junior Dos Santos vs Fedor Emelianenko would have been a super fight during their prime. But it is not the case anymore as both of them are well beyond their best years. However, there is a market for such fights. Dos Santos and Emelianenko are both fan favourites who are on the verge of riding off to the sunset. Hence one big payday before retirement will be a blessing for both fighters.

As for the logistics of the event, Scott Coker is not Dana White. Unlike White, Coker has done co-promotions previously. Hence, he will be much more open to the idea of a super fight. Khabib Nurmagomedov called Coker a “good friend.” If JDS wins against De Castro, the Fedor Emelianenko fight may very well become a possibility. EFC 47 goes down this weekend on April 20th at the FLX Arena in Florida.