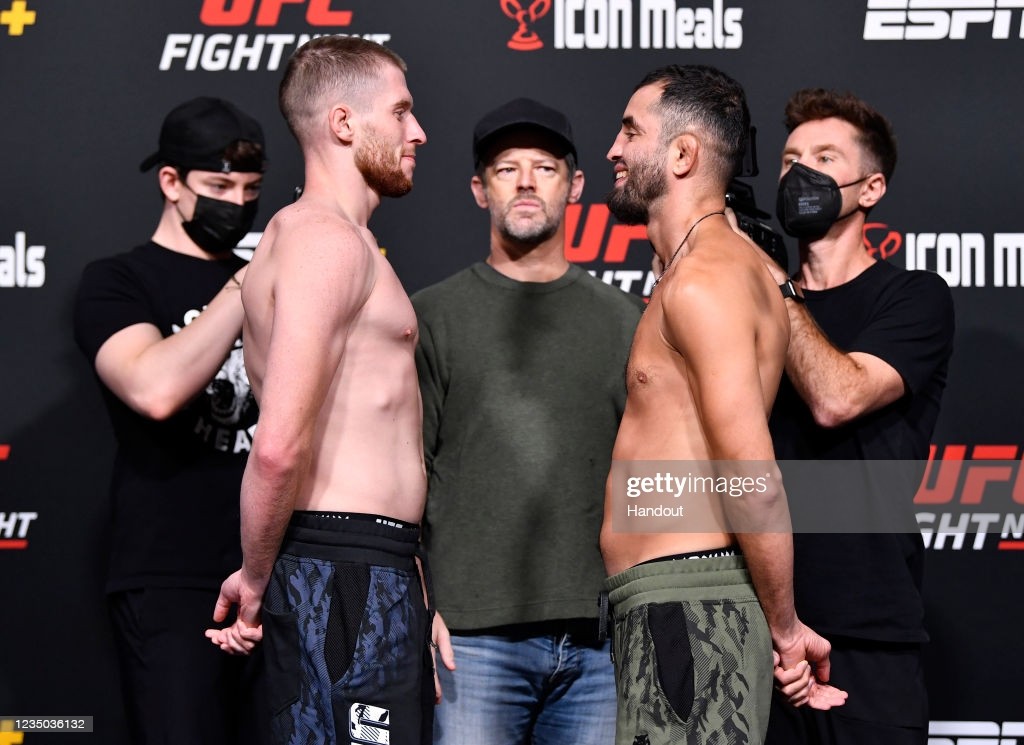 LAS VEGAS, NEVADA - SEPTEMBER 03: In this UFC handout, (L-R) Opponents Jack Shore of Wales and Liudvik Sholinian of the Ukraine face off during the UFC Fight Night weigh-in at UFC APEX on September 03, 2021 in Las Vegas, Nevada. (Photo by Jeff Bottari/Zuffa LLC)

There is hardly any time left before UFC Fight Night: Brunson vs Till will commence at the Apex in Las Vegas. As a result, several fans are excited to watch this high-profile main event middleweight clash. However, there are other fights in the card as well that are sure to grab the attention of fight fans across the world.

Therefore let’s take a look at one such fight that will take place in the undercard of the event. Jack Shore will take on Liudvik Sholinian in a three-round contest in the bantamweight division. Moving forward as we lead up to the fight, the Welsh fighter is on a three-fight winning streak in UFC since making his debut in 2019. As a result, he would try his best to continue his win streak and break into the top 15 of the stacked bantamweight division.

On the other hand, the Ukrainian fighter Sholinian will be making his debut in the UFC after fighting in different MMA promotions.  Thus this bantamweight clash could excite a lot of fans and they will keep a close eye on the performances of both these fighters. Before breaking down the fight and predicting the outcome, let’s take a look at the stats of the two fighters that will compete in Las Vegas at the Apex.

Jack Shore’s undefeated streak of 14 wins in MMA will be on the line as he faces the Ukrainian Liudvik Sholinian at UFC Fight Night Vegas 36. The Tank who made his debut in the promotion has impressed fans around the world after winning two back-to-back fights via submission. 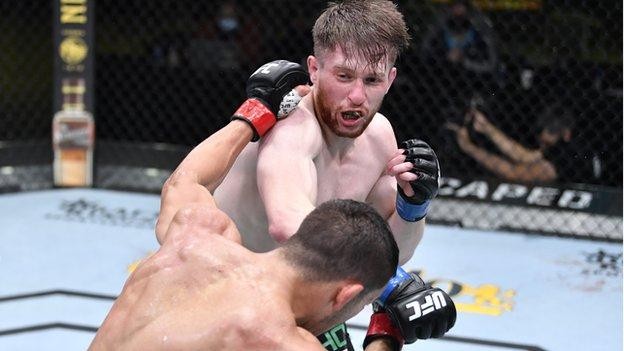 Therefore he will try to add Sholinian to his list of victims and try to continue his dominance in UFC. Moving on to the styles of the fighter, the Welsh fighter is a great wrestler with excellent takedown skills. Moreover, he is very skilled in submission as he has submitted 8 opponents in his 14 fight MMA career.

On the other hand, the Ukranian fighter also has a strong ground game and possesses decent striking skills. However, if we compare the skills of the two fighters in regards to grappling then the Welsh fighter overwhelms Liudvik in that category. Thus he will enter into this contest as a strong favorite against Palmeyros. In the end, it is expected that Jack Shore would get his hands raised by the referee at UFC Vegas 36.