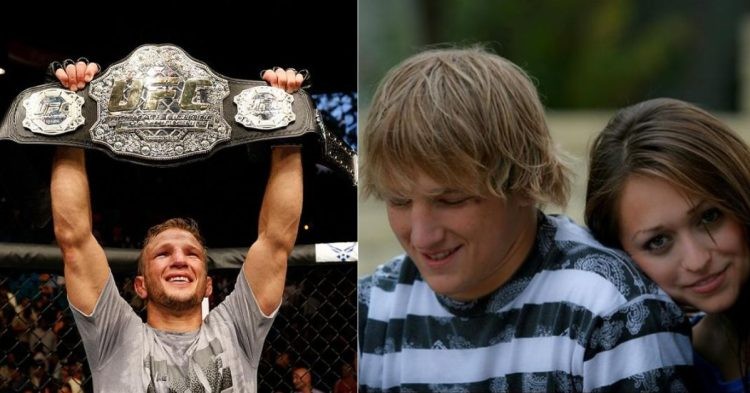 TJ Dillashaw is a highly accomplished mixed martial artist. A former two-time bantamweight champion and arguably one of the greatest mixed martial artists of all time. The 36-year-old from Sacramento, California has time and again proved his mettle inside the Octagon. However, regardless of his talents and credentials, MMA was not always an option for TJ Dillashaw.

It was TJ Dillashaw’s wife Rebecca Dillashaw who pushed the young Dillashaw into competing in mixed martial arts. “One of the reasons why I’m fighting is because of my wife,” Dillashaw said on the UFC 280 Countdown ahead of his title fight against Aljamain Sterling. “I don’t want to be a physician’s assistant and she knew that I would not be good in an office for eight hours a day.” He further added.

After a successful career in collegiate wrestling, Dillashaw shifted his attention to mixed martial arts. Mark Muñoz, Wwho coached at Cal St. Fullerton offered Dillashaw to come and train with him after his senior year. Dillashaw, who was dating Rebecca at the time, opened up the idea to her, and the support he received from he was all he could have asked for.

“I gave her the idea that I was going to go up to Sacramento and train with Team Alpha Male and try to become a fighter and she was all for it and kind of talked me into it,” Dillashaw recalls.

How did TJ Dillashaw meet his wife Rebecca Dillashaw?

While the details of their relationship are still unknown owing to their decision to keep their personal life price and away from the glitz and glamour of social media, we do know that TJ and Rebecca met each other while there were still in college.
Rebecca Dillashaw has a B.A degree in Visual Communication, and has worked as a Bussiness Coordination, Marketing, and PR Assistant. On September 28, 2017, Rebbeca Dillashaw and TJ Dillashaw welcomed their son Bronson Jack Dillashaw. The couple leads a happy life and the UFC Champion never fails to make the world know how much he loves his wife and kid through social media.
Tags: TJ DillashawUFC
Previous Post