BREAKING: UFC 256 Title Fight is Off! 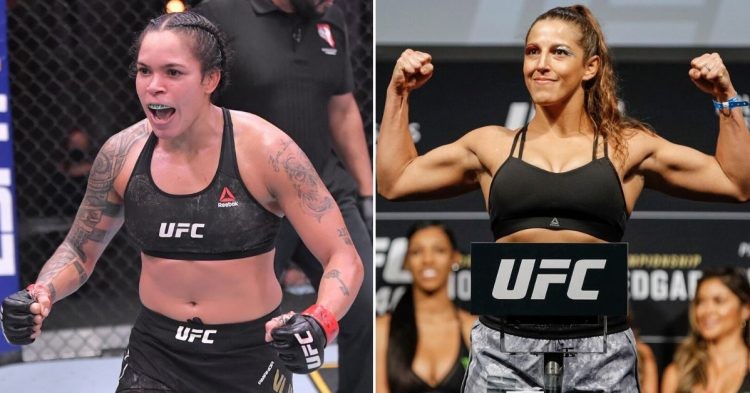 Amanda Nunes was scheduled to take on Megan Anderson for the UFC’s featherweight championship later this month in the co-main event of UFC 256. However. according to ESPN journalist Brett Okamoto, the fight has been called off.

Per sources, Amanda Nunes vs. Megan Anderson title fight at UFC 256 next month is off. More info to @ESPN shortly.

Nunes has pulled out of the bout because of undisclosed reason. Anderson was coming off an impressive two-fight winning streak. Anderson’s last loss came against former title contender Felicia Spencer.

Okamoto took to Twitter and shared the news. Earlier, the much-anticipated showdown between Kamaru Usman and Gilbert Burns was also scheduled to take place on the same card. However, late last month, Usman had pulled out of the bout owing to less time for preparation.

Arguably the greatest mixed martial artist of all time, Amanda Nunes has time and against proved her greatness inside the Octagon. With wins over the likes of Cris Cyborg, Ronda Rousey, Holly Holm, and Valentina Shevchenko, Nunes will go down as the greatest women’s martial artist beyond a reason of doubt.

It was supposed to be Nunes’ second outing inside the Octagon in 2020. However, seems like Nunes won’t be competing after all. The reason has not been disclosed yet, and more clarity is expected with time to come. Nunes recently became a mother and had stated that she wants to spend more time with her family.

Earlier, after defeating Felicia Spencer, Nunes became one of the very few fighters alongside Daniel Cormier and Henry Cejudo to defend her championship belt across both divisions while simultaneously reigning as the dual champion.

Whenever Nunes returns, the featherweight title shot is bound to go to Megan Anderson who has looked absolutely incredible in her past few performances. On the other side, former title contender Germaine de Randamie had called out Amanda Nunes for a trilogy. Randamie stated that she would retire if she cannot get past Nunes in the third bout. It’s an exciting time for the women’s division, and Nunes is at the top of it. Only time will tell what lies ahead, however, for now, the title defense won’t be taking place at UFC 256.