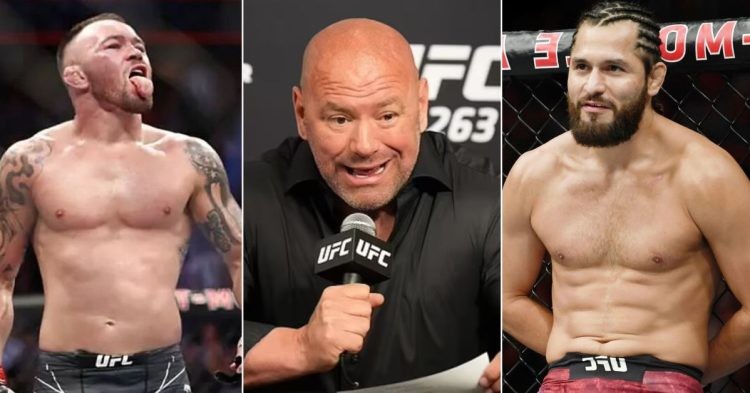 UFC President Dana White has outrightly denied claims made by former interim welterweight champion Colby Covington on Jorge Masvidal. Earlier, Covington had claimed that Masvidal is dodging a potential match-up and he heard he had told the UFC that he didn’t like the match-up stylistically.

However, not UFC President Dana White has vehemently denied any such claims and cleared the air. “I don’t think Masvidal said I don’t like that fight stylistically,”  White said in a conversation with the Schmo.

“We are working on that fight. That’s the fight we want to make and hopefully, we will get that done this year.” the Bossman announced.

Also Read I How Did Conor McGregor Meet Dee Devlin?

Colby Covington has earlier claimed that Masvidal is scared of him. He also added that it’s the “easiest fight” for him as both the fighters have fared against each other several times with each other when they were training partners. The former best friends turned foe have a great rivalry between them and one that is bound to get the attention of fight fans around the world.

Needless to say, UFC will be working on making this fight happen in 2021. Additionally, it is a match-up that is crucial to the UFC’s welterweight division. Covington is ranked #1 in the UFC welterweight rankings, while “Gamebred” sits at the fourth position.

Covington needs another win to his name before he can contend for the championship belt once again. Additionally, Kamaru Usman is set to defend his championship belt against #2 ranked welterweight contender Gilbert Burns in 2021.

Covington is coming off a TKO win over former welterweight champion Tyron Woodley. Meanwhile, Masvidal is fresh off a unanimous decision loss over Kamaru Usman. “Gamebred” stepped up to face Usman on short notice at UFC 254 after Burns pulled out of the bout due to coronavirus.

Needless to say, Colby Covington vs Jorge Masvidal is a PPV worthy fight and one that will determine the next title challenger. The hugely anticipated match-up could well be the biggest PPV of this year considering Masvidal’s ability to pull in big numbers and Covington’s increasing popularity.

BREAKING: Michael Chandler to Take on Dan Hooker in His UFC Debut