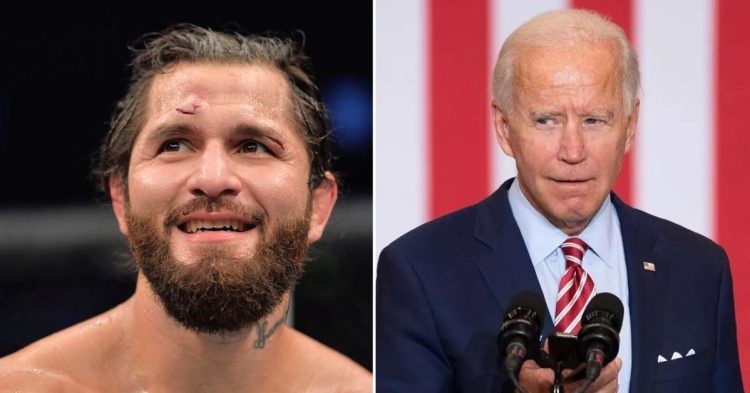 Jorge Masvidal has sent out a strong statement after Democrat Joe Biden took a huge lead against Republican Donald Trump in the on-going US Presidential elections. The former welterweight title contender demanded re-election and claimed that “they are selling wolf-tickets,” indicating a subtle dig at Biden. Biden has inched closer to the 270-mark and could become the U.S President with a win in just one state going forward. With voting left in five major states, of which two are swinging in favor of Biden, there’s every reason to believe that Donald Trump might not reclaim his Presidential seat.

They selling you wolf tickets #thereelection

Jorge Masvidal was present at several of Trump’s rallies and supported the Republican candidate ahead of the elections. Masvidal also welcomed Trump to Florida in one of his rallies where he even got up on the stage to express his thoughts on Trump’s candidacy.

“I’ve been hearing about the horrors of communism and socialism. We either re-elect President Trump and keep America great again, or we elect Joe Biden and the radical left take us down the slippery slopes of socialism and misery.” Masvidal had said in the Florida rally.

Masvidal was part of the “Fighter Against Socialism” and showed his undying support to the Democratic candidate.

Earlier, Masvidal revealed that he has voted for Presidential elections for the first time. He also added his reasons and why he believes Trump is a better fit as the U.S President than Joe Biden.

Additionally, soon after Donald Trump decided to move to Supreme Court, Masvidal demanded election as he took to Twitter with the #reelection.

Over 130k votes magically dumped off for China Joe in Michigan with 0 for POTUS while we all slept. This type of scam would’ve worked 30 years ago… Not today!! Keep fighting Patriots!!! 🇺🇸🦅🇺🇸

In a surprising turn of events, Masvidal and Covington have swayed in the same direction as they show their support for Trump in the on-going Presidential election.

"I stand to lose a lot, but I'm not going to be intimidated by no mob…I don't care.

"I'm speaking from my heart for those who can't speak like my father like my aunt who escaped communist Cuba."

The term “wolf-tickets” was also used by former Strikeforce champion Nick Diaz, who had previously slammed the UFC in the press-conference in the lead-up to his hugely anticipated bout against Georges St-Pierre.

Wolf-tickets is a straight translation from a colloquial Russian term which means a document with restrictive clauses rather than complete transparency.

Nick Diaz was taking a subtle dig at UFC’s business idea where St-Pierre was being portrayed as the hero, while the elder Diaz was the villain. According to urban dictionary, and on social media, the terms has been used to make fool of somebody.