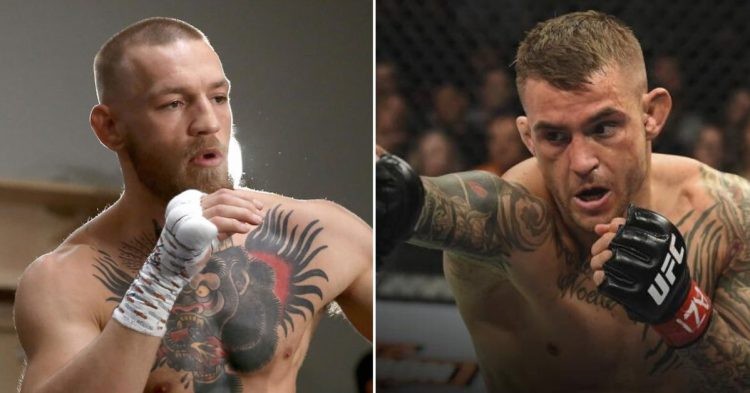 Conor McGregor and Dustin Poirier will take on each other in a highly anticipated rematch in the main event of UFC 257. The bout will also mark McGregor’s return to the lightweight division after his submission loss to lightweight champion Khabib Nurmagomedov back at UFC 229.

Conor McGregor is widely regarded as the most established striker in the UFC. McGregor heavily relies on his stand-up game to triumph over his opponents. As seen from his previous bouts, McGregor is a ferocious striker and someone with a one-punch knockout ability. Needless to say, McGregor’s 19 stoppage wins of his 22 professional victories inside the Octagon. However, what stands in front of him on the eve of UFC 257 is someone who is equally brilliant.

Dustin Poirier has time and again proved why he is one of the best lightweight fighters of all time. With notable victories against the likes of Max Holloway, Eddie Alvarez, and Justin Gaethje, Poirier stands as the #2 lightweight contender of the world. Ahead of the epic showdown against the “Notorious,” let’s try to understand who has the edge in terms of striking between arguably the greatest lightweight fighters of all time.

Dustin Poirier is underrated! The “Diamond” has racked up victories against some of the best that the lightweight division had to offer. Barring the sole loss to Khabib Nurmagomedov, Poirier has proved his mettle inside the Octagon against the very best that the division has offered him.

Poirier is not orthodox. However, he does shift between rounds in order to adjust to his opponent. He is a southpaw boxer and relies on his accuracy and volume to dominate his opponent. Poirier has great head movement, as seen during his bout against a very dangerous Justin Gaethje, and has credible power in his hands.

Poirier landed 208 of the 289 significant strikes with an unbelievable accuracy of 66% against Dan Hooker in his last bout back in July this year. Poirier has a gas-tank for days, as was evident from his last bout. Additionally, Poirier adapts and evolves as the round progress and has the quality of a five-round fighter.

Conor McGregor is known for his impeccable timing and devastating power. UFC fans are well aware of the power that the “Notorious” carries in his left hand. However, it’s McGregor’s placement and timing that makes him arguably the fiercest strikers in the history of UFC. McGregor’s power is unparalleled, and he has proved it with stoppage wins across three divisions.

He is the only fighter in the history of the UFC to secure knockout wins at the featherweight, lightweight, and welterweight divisions. McGregor achieved the feat in his last return to the Octagon back at UFC 246 when he knocked out Donald Cerrone in just 40 seconds to announce his triumphant return.

McGregor’s incredible performance against a seasoned veteran in the form of Eddie Alvarez was admirable to say nonetheless. He absolutely dominated the then lightweight champion of the world in what was a one-sided striking battle in favor of McGregor.

Needless to say, Dustin Poirier and Conor McGregor will put up a show come UFC 257. There’s a reason to believe that the match-up could turn in the favor of Poirier should he incorporate his wrestling. However, McGregor will likely keep the fight to the ground and is a sure favorite to get his hand raised this January in 2021.

A Detailed Breakdown of LeBron James’ Net Worth