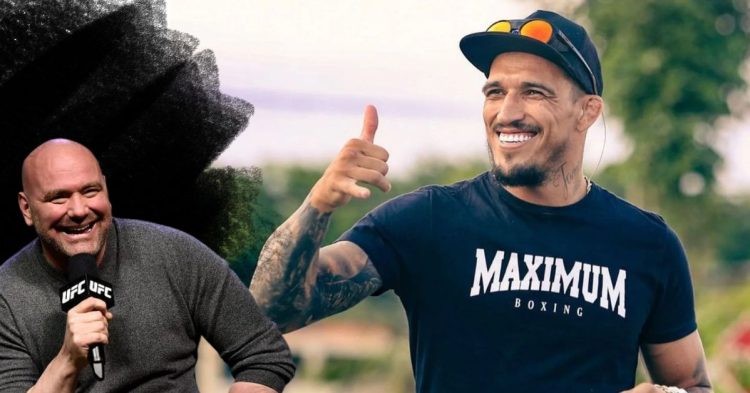 It’s a no-brainer that the Champion in a PPV event gets some share of the PPV revenue. But how about when there’s no Champion fighting in the main event? How about when it’s a grudge match worthy of a PPV headliner or for a vacant title? UFC 280 will be one of those cases as Charles Oliveira and Islam Makhachev will share the Octagon to fight for the vacant lightweight champion in Abu Dhabi this weekend.

How much will Charles Oliveira make for UFC 280? Well, that’s something that UFC has kept under wraps but what we do know is that Oliveira will take home some share of the PPV revenue.

Ahead of UFC 280, Oliveira interacted with the media and had a thing or two to say about being given PPV points for the much-anticipated showdown in Abu Dhabi.

“You want to know?” Oliveira chuckled, “I will. I am the Champion.” He said. Oliveira’s initial reaction brought a smile from everyone present in the room, including Oliveira who responded very calmly to the question.

How much will Charles Oliveira make for UFC 280?

According to multiple reports, Oliveira made half a million dollars in the title fight against Michael Chandler and Dustin Poirier. According to SportsZion, Do Bronx pocketed a mammoth 1.6 million for his last fight against Justin Gaethje back at UFC 274.

UFC has not disclosed the fight purse for fighters competing at UFC 280. However, it’s safe to say Oliveira will make in the excess of $500,000 considering his star power and his continued dominance in the UFC’s lightweight division.

Moreoever, a cut from the PPV revenue means the Brazilian fighter will walk home with a huge moolah after everything is said and done. While we are not aware whether or not Islam Makhachev will also have a share in the UFC 280 PPV revenue, it’s safe to say that the company looks at Oliveira as the Champion in their eyes.

UFC President Dana White also referred to Charles Oliveira as the Champion, and while he may not have the belt on his waist, Do Bronx has the approval of fight fans around the world. The Champion has a name, and it’s Charles Oliveira.