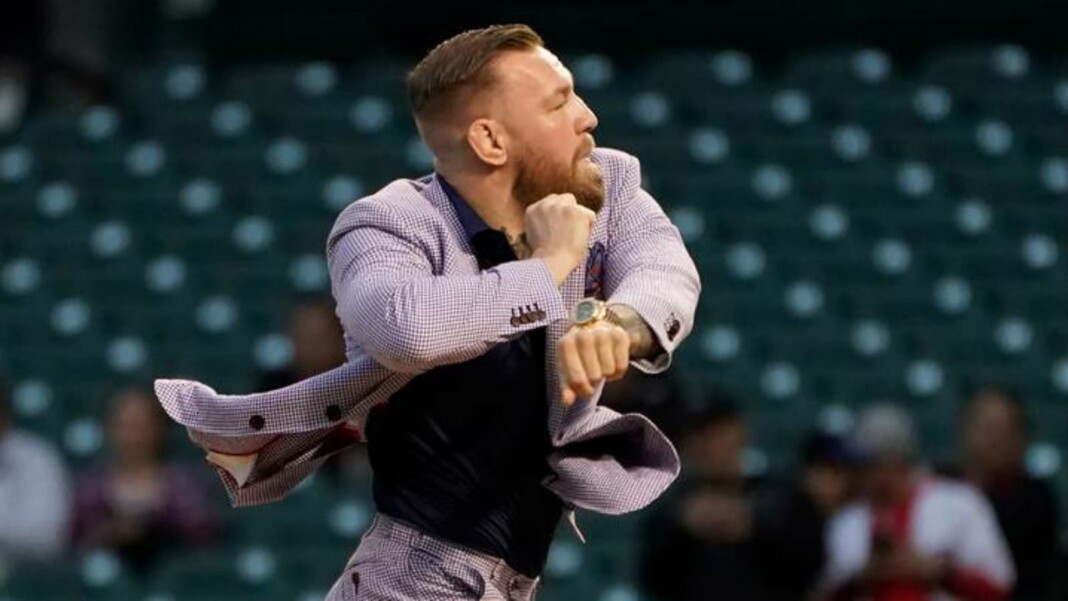 UFC star Conor McGregor is highly acknowledged for his vicious left hand around the whole world. But when it comes to throwing a pitch at a baseball game the Irishman could not replicate his wonders. The UFC superstar was present at the Wrigley Field to throw the ceremonial first pitch ahead of the baseball game between the Chicago Cubs and Minnesota Twins.

Conor McGregor was spotted wearing a well-tailored suit as he was preparing to throw the pitch. McGregor’s windup looked pretty neat but the execution of the pitch was terrible. As he released the pitch, the ball sailed wide to the right, landing close to the spectators in the stands as the ball bumped into a brick wall which separates the fans from the playing arena.

Just a bit outside from McGregor

The footage of Conor McGregor’s embarrassing throw quickly went viral on social media. Some baseball analysts and fans even termed McGregor’s pitch as “the worst pitch of all time”. McGregor even later sarcastically commented that his pitch “was the most devastating first pitch ever seen! The venom is there, the power is there.” he later added.

Even UFC lightweight contender Justin Gaethje joined in the fun by tweeting  “I cannot stop laughing at this. Every MMA fighter that has represented us doing this has looked terrible but this takes the cake.”

I cannot stop laughing at this. Every MMA fighter that has represented us doing this has looked terrible but this takes the cake. https://t.co/n6Ck9AQ7wG

This isn’t the first time we have seen “The Notorious’” throw something other than a punch. A few years ago, McGregor tried to throw a football before a Dallas Cowboys game and the outcome was pretty much similar to what we saw at the baseball pitch.

Well it is fair to say that baseball is not Conor McGregor’s cup of tea, but the Irish powerhouse dominance in MMA should not be overlooked. McGregor is a former UFC two-division champion and his credentials has proven that he is one of the best mixed martial artists on the planet.