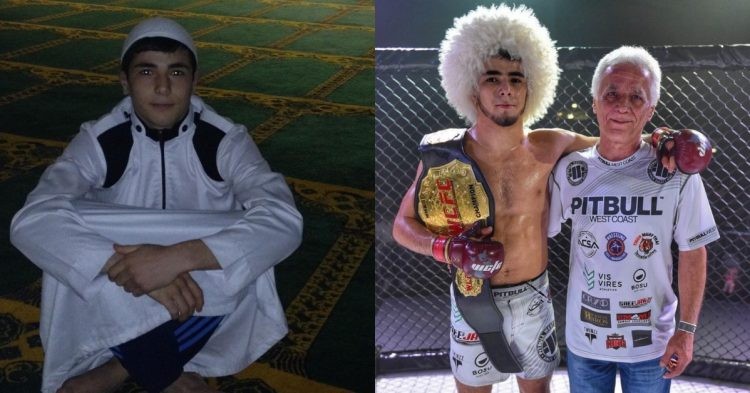 Muhammad Mokaev is a fighter in the UFC flyweight division. He was born on July 30th 2000. Despite being such a young fighter, Mokaev has made a big impression on the fans. He started his pro career at the age of 20 and is yet to be defeated inside the cage. Mokaev holds a record of 8-0 and is currently under contract with the Ultimate Fighting Championship (UFC).

Despite such a great start to his career, Mokaev does not want to fight in the sport for a long period of time. Muhammad is a very religious man and believes his stay in the sport will be a short-lived one. According to him, fighting is forbidden in his religion. On top of that, being an MMA fighter takes a lot of dedication and time. Hence, he wants a better life for himself and his family in the future, outside the sport.

So what is Muhammad Mokaev’s background? Where did he grow up and who are his family members? Let’s find out.

What is Muhammad Mokaev’s nationality?

Muhammad Mokaev is currently living in Manchester, England. However, the 22-year-old is originally from Dagestan. Mokaev is from the Buynaksk region of Dagestan. Mokaev’s family moved out of Khabib Nurmagomedov’s home country in 2012 when they arrived in Liverpool to start a new life in the United Kingdom.

But why did Mokaev leave Dagestan? As per him, fighting was embedded in the culture of Dagestan. Fighting was given more importance in the country than education. Mokaev also revealed that there was nothing for the children to do there and it eventually led to scraps. However, they left Dagestan not because they were looking for a better life, but because Mokaev’s father ran into some trouble.

As a result, Mokaev left his birthplace when he was only 12 years of age. However, neither he nor his father spoke English and had to start their life in England from “zero.” So how did they make living in a completely new country? In an interview with CNN in 2020, Mokaev revealed what his life was truly like in the early days after his move to the UK.

“I came to UK as a refugee and I was getting like £5 a day. Me and my father on £5 a day, it’s like maybe $6-7, and it’s like you have to split this for food and clothes and Internet for your phone. It’s not enough. I was hungry.”

Coming into a different culture, it was hard for Mokaev to adjust. In Dagestan, fighting on the streets was a normal occurrence. But doing the same in England, was really not an option. Although mainstream sports such as soccer were available for him, Mokaev chose wrestling and boxing over that. But soon after that, he was also introduced to Mixed Martial Arts (MMA).

Mokaev, who realised traditional education was not his cup of tea, started his amateur career in 2015. Before turning pro, Muhammad amassed an amateur record of 23-0.

Muhammad Mokaev revealed during the interview that his father’s name is Murad and he was a learned man. Back in his home country, Murad was a “building engineer.” He also revealed that his mother died when he was only 8 years of age.

Mokaev currently trains out of KHK MMA Team, which was founded by Khalid Bin Hamad Al Khalifa in Manama, Bahrain. Al Khalifa helped him earlier in his career as well when Mokaev missed a flight for his 2019 IMMAF-WMMAA tournament.

Muhammad lives there for the purpose of his training and found the love of his life there. In 2020, Mokaev married Khava Eldarbekova, who is a medical practitioner in the country. However, the couple ran into some trouble when Mokaev wanted Khava to visit the UK.

In February 2021, they appealed for a visa to visit Mokaev’s father in the UK. But the 30-day visa was denied. After that, they applied for a shorter-term visa which was also denied by the Home Office, as the authorities cited £4,884 in her account as a reason to believe that she may not leave the country. It obviously frustrated the MMA fighter who had to shell out £2,500 on two visa applications.

In an interview with The Independent in 2021, Mokaev let out his frustrations and added that he had to focus on this particular issue which was making a dent in his career.

Thanks for refusing my wife’s visa, after representing UK🇬🇧for 9 years 👏 @ukhomeoffice @pritipatel

“In March I had a fight in Bahrain, but I had to be in a visa centre in the morning. I missed the bus going to the arena. I was meant to be there for media, medicals and signings for sponsors, but I was in the visa centre until 1pm to sort out the application. It was a headache.” (h/t via The Independent)

Why did Home Office decided to contact my wife’s place of employment to verify wether she’s actually employed there or not, after they have already rejected her visa application?
Shouldn’t verification process be done prior to making decision? @pritipatel @ukhomeoffice

Following his public outrage, the visa was later approved. Nicknamed ‘The Punisher‘, Mokaev became a citizen of England in November of 2021. In a tweet, he thanked the UK Home Office and revealed that he was proud to represent the country.