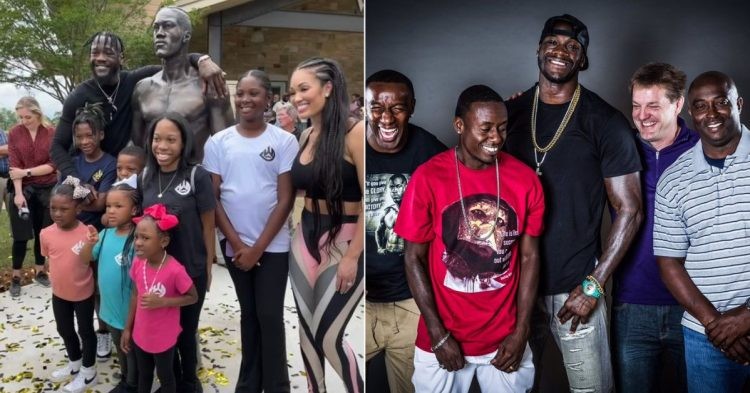 You don’t become one of the fiercest punchers in the history of boxing without discipline. Olympic Bronze medalist, US National Champion, and former WBC heavyweight champion, Deontay Wilder has already cemented his position as one of the greatest boxers of all time. And all the more impactful too.
The idea of hard work and discipline was inculcated in Wilder from a very young age. Wilder’s father was a pastor, and his siblings never failed to inspire him. Growing up in a family of Alabama preachers, Wilder learned early, that a life of discipline and gratitude was always rewarding.
“My upbringing was uh it was pretty good you know um I have, I had a loving father and a loving mother and I was fortunate to you know have my father in my life to teach me and my brothers uh multiples of things through our life.” Wilder said while speaking on the Pivot Podcast.

True success in life happens only through Jesus Christ,so God has to be#1 on a Christian’s narrow path.
☆Wise old man,my friend
-Marlon Dunn

Deontay Wilder has been quite vocal about his religious beliefs. He has always affirmed that “god is very important” in his life and even revealed that he attended church every week as a youngster.

Despite the ferocious knockout power, and someone that enters the boxing ring to take the life out of you, Wilder is soft-spoken and has an endearing personality.

Wilder chooses his words wisely, and coming from a family of preachers, has a certain way of putting his thoughts across. It’s always as if he is chanting a sermon sometimes. But for those who have listened to Wilder closely, it’s quite apparent the wisdom he carries.
“You know I mean I’m a PK as well but my dad was he was very strict because we represented him everywhere we go. Being that he was a voice inside the church and had so much power that way that whatever we did on the outside we represented him so we conduct ourselves in a certain way.” He further added.

God has a plan for me and he has blessed me with the tools to fulfill it. Thy will be done. No looking back. #BombZquad #WilderBreazeale #May18th #PBConSHOWTIME #TilThisDay pic.twitter.com/YNt2hwkzEg

Eldest of the four siblings, Deontay Wilder saw it as his responsibility to provide for his brother and sisters. So the idea of being responsible for his actions, and being able to rise through difficult situations came at a very early stage of Deontay Wilder’s life.
Tags: BoxingDeontay Wilder
Previous Post