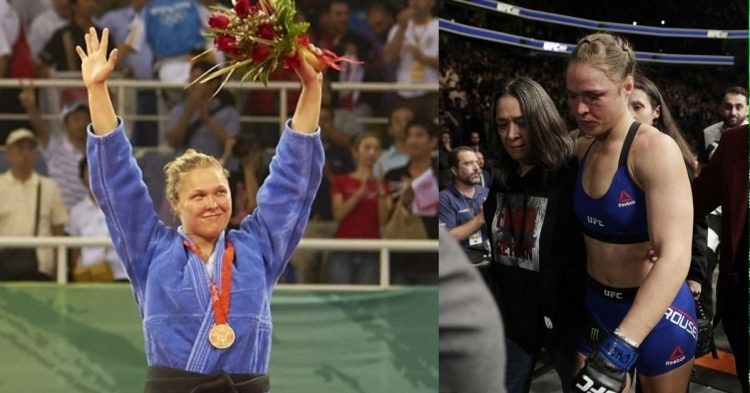 Clearly, Ronda Rousey is a superstar. She is among the most well-known female fighters in history. Her reputation has led her well beyond fighting, with appearances on chat shows and roles in high-profile films. However, the story of a woman who endured significant hardships during her life may be found underneath all the praises. Rowdy once asserted in an interview that her mother played a significant role in her development into the individual she is today.

Due to her early preparation, Ronda, the youngest judoka to compete at the Olympics, carried on the legacy of her mom, a world champion in the same sport. She suffered a horrible defeat in the Judo competition at the 2004 Summer Olympics, but she recovered to win the bronze medal in 2008, becoming the first American woman to win a medal in the sport.

Also read: Ronda Rousey’s Life Before Fighting, Husband, Kid, and Family – All You Need to Know

Rousey’s parents have always been behind her. Her father always told her, “You’re going to win the Olympics,” since he had a lot of faith in her. He constantly assured her she was going to be the best in the world, according to Ronda’s mother, Dr. AnnMaria De Mars, a former world champion in the sport of judo. With Ronda’s mom by her side, she taught Rousey how to set up the arm bar and get opponents to the ground. She qualified for the 2004 Summer Olympics at the age of 17. She was still dealing with personal issues, which resulted in a loss at the Olympics that year. She would go on to weigh 154 pounds and win a bronze medal at the 2008 Olympics. She fulfilled her father’s dream by becoming the first American to win an Olympic medal in judo.

Who is Ronda Rousey’s mother?

A judoka, author, and American technology executive, AnnMaria De Mars was born on August 15, 1958. She competed in the -56 kg weight class for the 1984 World Judo Tournament and became the first American to win a gold medal there. De Mars is the CEO of 7 Generation Games and The Julia Group in addition to being a statistician, Native American activist, and grant writer for a number of Native American projects. De Mars was included in Forbes’ annual list of the “40 Women to Watch Over 40” in 2013, which honors the accomplishments and backgrounds of women who are making significant contributions to their industries of innovation and disruption after the age of 40. Ronda Rousey, a judoka who won a bronze medal at the Olympics and a former UFC Bantamweight world champion, is the daughter of De Mars.