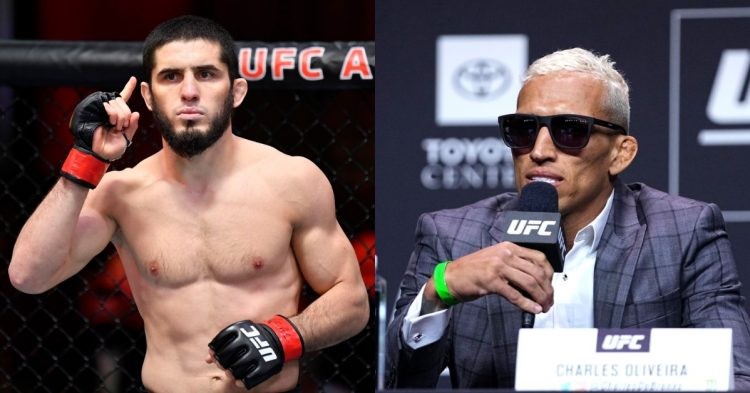 Former UFC lightweight champion Charles Oliveira will get back in action this weekend on October 22nd as he takes on Islam Makhachev in the main event of UFC 280. The Brazilian lightweight will look to reclaim his belt in this five-round title bout after losing it due to missing weight in his last matchup.

Do Bronx is in spectacular form as he is on an eleven-fight winning streak. However, to be able to reach this point, Oliveira has dealt with several adversities. The Brazilian lightweight has overcome a life-threatening injury in the past and has been fighting with a lifetime vision impairment.

Charles Oliveira cannot see without his glasses and in fights, the former UFC champion used to see multiple fighters at a time. The Brazilian lightweight fighter explained his problem during one of the podcasts.

“I see three [faces]. Three guys for me is perfect. If I take my glasses off, I only see 50 per cent but it never hindered me in a fight.”

Although Oliveira won’t be facing this problem in his fight against Islam Makhachev as he underwent surgery to correct his eyesight. Charles confirmed this news while speaking in an interview.

“I had the surgery, and my eyes are 100 percent perfect. I can see everything now.”

As mentioned earlier, Charles Oliveira is in great form and his recent win over Justin Gaethje has given him a big boost in confidence. Consequently, leading into this title bout, the Brazilian lightweight is extremely confident that he will get the job done against Islam Makhachev at UFC 280.

Do Bronx has predicted that the title fight won’t go past the first round and has claimed to finish Makhachev. Both Makhachev and Oliveira are very positive about their chances in this title bout.

Speaking about this matchup, both the. lightweight contenders are evenly matched up. Therefore it would be fascinating to see who’s winning streak will come to an end as Makhachev has not suffered a single defeat in his last ten bouts.

With that being said, fans can expect an entertaining fight filled with violence as both the lightweights are extremely aggressive and like to go for the kill. Do let us know in the comments section who you think will win the UFC 280 main event fight between Charles Oliveira and Islam Makhachev.