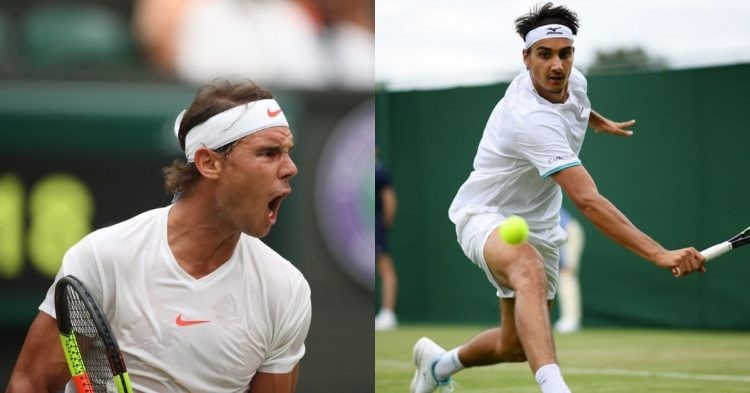 Rafael Nadal won his match against Lorenzo Sonego in straight sets to make it to the quarterfinal of Wimbledon. However, the match saw some controversy and banter between the two players in the middle of the match. It led to some drama but everything was resolved in the end.

During the match, there came a point when Nadal was irritated by Sonego’s grunting. Nadal, who himself grunts a lot during matches, confronted Sonego by calling him to the net. This did not go down well with Sonego as he objected to the confrontation.

After Nadal was broken, he went straight to the net & summon Sonego to lecture him on grunting without the umpire’s consent.
The umpire didn’t stop Nadal from doing so, instead he talked with Sonego.
Sonego looked at a loss & dismayed throughout the process.@pavyg @Yolitatennis pic.twitter.com/n4ugFTd59P

However, Nadal realized his mistake and apologized after the match when the two came forward for a handshake. He said, “I have to say that I was wrong. I should not call him on the net. So apologize for that. My mistake in that. No problem. I recognize that.”

Nadal and Sonego talked for a long time near the net after the match and continued their talk outside the court. When asked about the locker room talk, Nadal refused to divulge information and termed it private. Moreover, Nadal said, “It’s something that I spoke with him in the locker room and it stays there. Only thing I can say is I saw him personally.”

During the post-match interview, Nadal apologized to Sonego and revealed he never meant to bother Lorenzo with his talk. In fact, he tried to confront his opponent about grunting in the most positive way. However, Lorenzo misunderstood it and took offense.

Furthermore, Nadal said, “My intention was never to bother him at all. Just to tell one thing that was bothering me that I think he was doing at that moment, but that’s it. We had some issues there, but that’s it.”

For Nadal, his match against Sonego was his best till now at Wimbledon. He said, “This was probably my best match here without a doubt during the championships, against the most difficult player I faced.” He will now face Botic van de Zandschulp in the Round of 16.