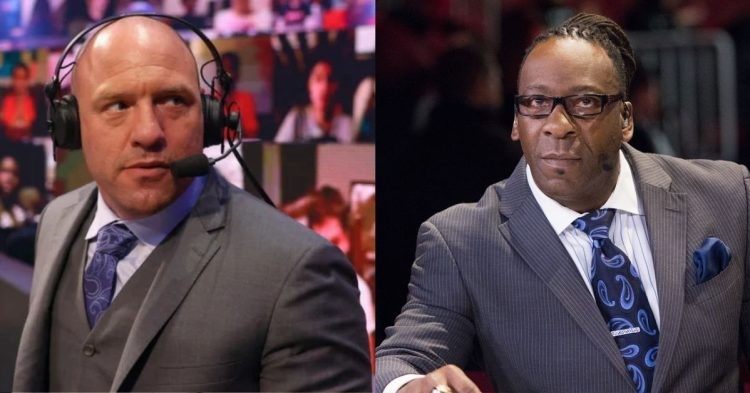 Jimmy Smith is no longer a part of WWE.

WWE announced its new announcer team for RAW, SMACKDOWN, and NXT via social media. Fans noticed that Jimmy Smith was not announced on either show. Later Jimmy confirmed through his Twitter that he is no longer a part of WWE.

Just wanted to say, now that the story is officially out, that my time with the WWE is officially done. Had a lot of fun and met some great people. Really and truly blown away by the acceptance from the WWE fans! You folks make it work every week and your enthusiasm was amazing!

As announced before, Michael Cole and Wade Barrett will serve as the Friday Night SmackDown commentary team, with Samantha Irvin continuing to announce the matches. Interviews behind the scenes will be conducted by Megan Morant and Kayla Braxton. On Raw, Byron Saxton will conduct backstage interviews while Corey Graves and Kevin Patrick will call the action. Mike Rome will continue to announce from the ring. Cathy Kelley will also be back to do backstage interviews.

Vic Joseph and Booker T will call the action on NXT2.0, and Alicia Taylor will resume announcing from the ring. McKenzie Mitchell will keep doing interviews behind the scenes.

The commentary for Premium Live Events or pay-per-views will be handled by Michael Cole and Corey Graves, while Pat McAfee is likely to return after his work for ESPN College GameDay is completed.

Who is Jimmy Smith?

Jimmy Smith is a former mixed martial fighter and American sports announcer. On the Discovery Channel, he and Doug Anderson co-hosted the program Fight Quest.

Additionally, he has worked as a pundit for Premier Boxing Champions, Bellator, UFC, and WWE’s Raw brand. He served as American Ninja Warrior’s host from 2010 to 2011. As a result of his extensive fight experience, Jimmy Smith calls contests on Raw every Monday night with energy and passion.

Smith started making appearances on NXT in 2021 to provide his knowledge and share his perspectives on the most important matches for the brand. In May, he would formally join WWE and serve as the play-by-play announcer for Monday Night Raw with Byron Saxton and Corey Graves.

In May 2021, Smith joined WWE as “Raw’s” lead announcer, taking Adnan Virk’s place as a former “SportsCenter” anchor. Only six weeks prior, Virk had replaced Tom Hannifan (also known as Tom Phillips), the current Impact announcer, by joining WWE. However, after receiving a poor fan response, Virk was promptly fired from his post.