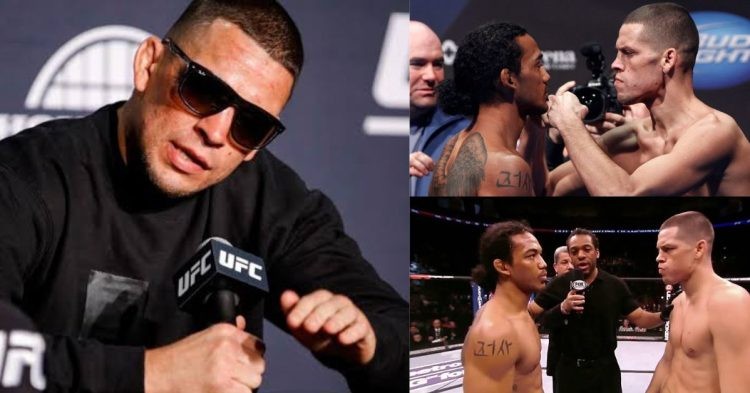 In a recent interview with Ariel Helwani at the MMA Hour show, Nate Diaz made many surprising revelations from his fight purse for his lightweight title shot against Benson Henderson that there are only two fighters who are worth fighting in the UFC.

“It’s been a big objective of mine since I don’t know what year it was but before I fought Ben Henderson. When I was always fighting and doing my thing and then I wondered back then I said to myself what the f*** did I just sign a contract though to fight for low ball pay for eight fights way back then.”

Nate Diaz is not the only fighter who is unhappy with the UFC’s fighter pay system as current heavyweight champion Francis Ngannou is also in an ongoing contract issue with the fighting organization.

Apart from these two superstars, there are several fighters in the promotion who are underpaid and are battling it out with the UFC in the background. Therefore it is needless to say that the UFC needs to figure out a way to keep their biggest stars happy or else they will lose them to their rival promotions.

Nate Diaz has only one fight left on his UFC contract and he has no plans of re-signing with the organization. However, Diaz is yet to find an opponent for his last fight and while speaking to Ariel Helwani, The Stockton Slugger revealed the reason why he has not stepped inside the octagon since his loss to Leon Edwards last year.

“Yeah, I was trying to get the show on the road but they don’t want me out of contract and they’re keeping me in and they’re holding me hostage and I want to get out that’s my main objective.”

It’s not that Diaz doesn’t want to fight inside the UFC octagon as the former title contender has been in discussion with several fighters like Dustin Poirier, Michael Chandler and Khamzat Chimaev on social media. Moreover, he had even verbally agreed with a couple of fighters for his final UFC fight.

But every time due for some reason there is a breakdown in talks and the matchup is not happening. It is needless to say that Nate is unhappy with his current situation and is therefore publicly speaking out about his disappointment with the UFC.