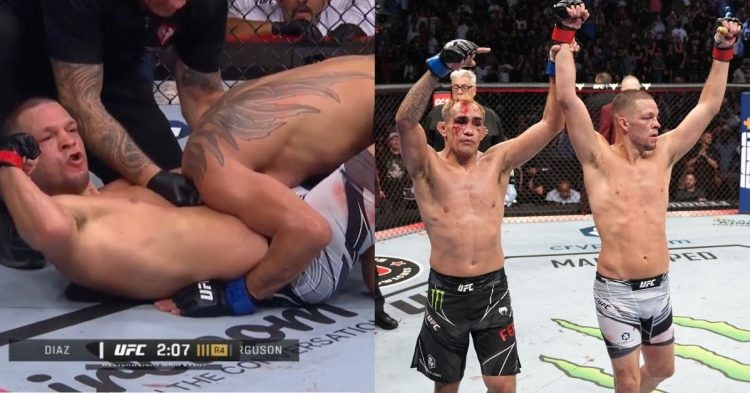 Nate Diaz stepped inside the octagon after a lengthy one-year layoff to take on Tony Ferguson in a five-round main event clash at UFC 279. This highly anticipated welterweight matchup took place at the sell-out T-Mobile Arena in Las Vegas.

It is needless to say that fight fans around the world had their eyes hooked on this main event as this was Diaz’s last fight on the UFC contract. Interestingly, The Stockton native was not supposed to fight El Cucuy as Khamzat Chimaev was his initial opponent.

However, Khamzat Chimaev was unable to make weight and consequently, the UFC had to book Diaz vs Ferguson at the last hour of the PPV. As expected, this matchup between Diaz and Ferguson was wild and it was filled with several breathtaking moments.

In the end, Nate Diaz got the better of Tony Ferguson as he submitted El Cucuy with a guillotine choke in the fourth round of the fight. It was a very close fight with both welterweights having their moments.

Tony started the fight aggressively and attacked Diaz with leg kicks. He found great success as he peppered The Stockton Native. However, Nate checked one of Tony’s leg kick attempts and El Cucy’s shin started to bleed.

While Tony landed a lot of leg kicks, Nate Diaz stunned El Cucuy with his punches. In the third round, Ferguson’s inside leg kicks troubled The Stockton Slugger. However, Diaz kept his composure and attacked Tony from a distance.

It paid dividends for him in the fourth round as he wobbled Tony with a right hook and thereafter El Cucuy attempted a takedown. Diaz capitalised on it and locked in a guillotine choke and finished the fight.

Nate Diaz ended his last fight in the UFC in remarkable fashion as he became the first fighter to submit Tony Ferguson since 2009. Following his brilliant win, several fighters reacted to Diaz’s performance and praised The Stockton Native’s stellar UFC career.

Respect to two OGs of the fight game, honor to watch you both go to battle @NateDiaz209 @TonyFergusonXT 👏 #UFC279

What a show. Love this game.

Nate Diaz is a true legend of this sport and it is needless to say that he will be successful in his new venture, Real Fight inc. The Stockton Slugger bowed out of UFC by delivering a highly entertaining performance.