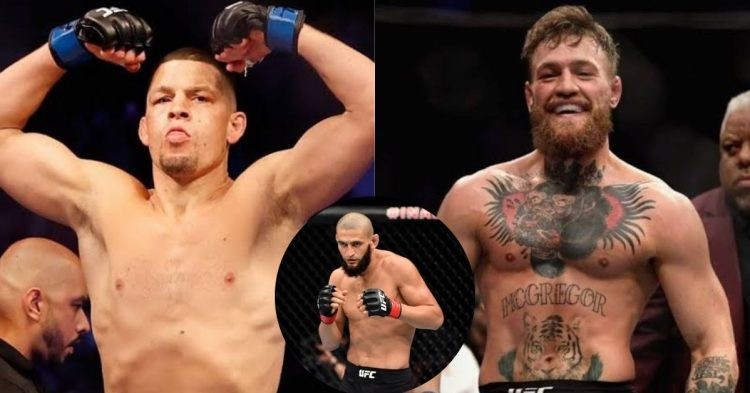 UFC has almost finalised the main event clash between Nate Diaz and Khamzat Chimaev that will take place on September 10th in Las Vegas at UFC 279. The news surrounding this welterweight super fight made the headlines after UFC Chief Business Operations Hunter Campbell revealed it while having a conversation with Brett Okamoto.

However, the contracts for this fight have not been officially signed by both the welterweights. But the good news for fans is that they will most likely be able to witness this matchup as they have verbally agreed to fight.

After months of back and forth with each other on social media, Nate Diaz and Khamzat Chimaev will finally square off inside the octagon. Interestingly, with this welterweight matchup against Chimaev all set to take place in the main event, Nate will join an elite club of fighters to have featured more than two times in a non-title main event PPV clash.

Will the matchup against Khamzat Chimaev be the last fight for Nate Diaz in the UFC?

Nate Diaz had only one fight left on his UFC contract and after the announcement of his matchup against Khamzat Chimaev, The Stockton Slugger’s contract with the UFC will get over.

With that being said, Diaz has no plans of re-signing a contract with the promotion due to his bad relationship with Dana White and hence we could see him part ways with the UFC after the conclusion of his upcoming fight.

Regardless of him not winning a title in his UFC career, Nate Diaz will go down in the books as one of the greatest fighters in the history of UFC. It is needless to say that fans will miss his aura once he leaves UFC. In the end, it would be nice to see him go out of the promotion with a win to his name.

But it will be easier said than done as Khamzat Chimaev is highly skilled and one of the most dangerous fighters in the welterweight division. The Borz is very confident about finishing Nate and has sent a stern warning after the announcement.

Do let us know in the comments section your thoughts about this matchup between Nate Diaz and Khamzat Chimaev.