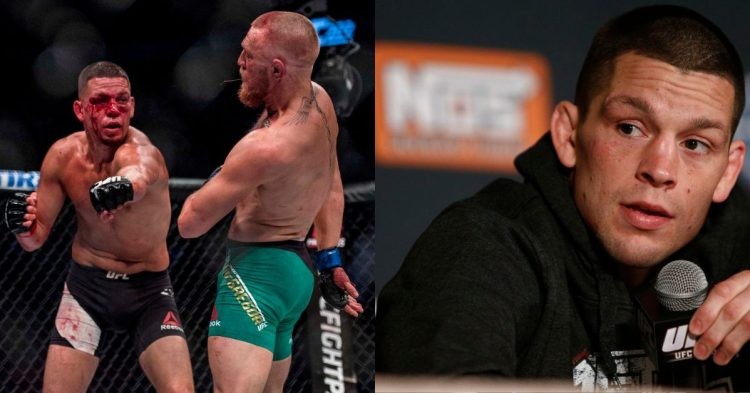 Nate Diaz is surely one of the biggest superstars in MMA today and is often regarded as one the legend of the sport, just like his bigger brother, Nick Diaz. The younger Diaz made his UFC debut in 2007 and since then he has faced some of the toughest fighters in the promotion throughout his long career in the sport.

The Stockton slugger has a total net worth of around $5 million. He earned his biggest paycheck against Conor McGregor in their second run-in, which was around $2,070,000. Diaz’s most recent fight was against the current welterweight champion Leon Edwards which earned him a massive seven-figure purse at UFC 263 bout.

Nate has a long career in the promotion and surely will earn a hefty amount for his next fight against Khamzat Chimaev. His total UFC career earnings are reported to be around $5,003,100.

Today, we will look closely at the career earnings of Nate Diaz from his fighting career in the UFC. This list only focuses on the disclosed pay that Diaz has earned from his UFC career.

How much money Nate Diaz earned for beating Conor McGregor?

Nate Diaz made his debut in the UFC at TUF 5 Finale against Manvel Gamburyan. In this fight, he earned $16K, including an $8K win bonus. His next bout was against Junior Assuncao in UFC Fight Night: Thomas vs. Florian). Diaz bagged $15K for show money and a win bonus of $15K.

Nate fought in the main event of a UFC Fight Night against Josh Neer and earned $70K. This includes a $20 base salary, a $20K win bonus, and a $30K Fight of the Night bonus.

Diaz earned $50,000 for facing Benson Henderson and $15,000 to fight Josh Thomson. In TUF: Team Rousey vs. Team Tate Finale, Nate fought Gray Maynard in which he earned $80K which included $15K to show, $15K for the win bonus, and $50K for the Knockout of the Night bonus.

Nate had his run-in with Rafael dos Anjos and before the fight, he was fined $4K for missing weight. Diaz earned $16K in this fight. Diaz got back to his winning ways when he fought Michael Johnson. He earned $110K ($20K show money, $20K win bonus, $50K Fight of the Night bonus, and $20K for Reebok sponsorship).

Nate became a household name and started to earn big after he fought Conor McGregor for the title. In UFC 196, Nate shocked the world and earned a total of $620,000. This includes $500K to show, $50K for the Fight of the Night bonus, $50K Performance of the Night bonus, and $20K from Reebok sponsorship.

In his second run-in with McGregor at UFC 202, Diaz lost to McGregor via decision yet this fight remains to be the biggest money fight of his entire career. Diaz earned a whopping $2,070,000 which includes $2,000,000 show money, $50K Fight of the Night bonus, and an additional $20K from Reebok sponsorship.

In his recent fight against Leon Edwards, the Stockton slugger pocketed a massive $1,121,000 which includes a cool $600K PPV bonus, as per MMA Salaries. Nate’s total UFC Career Earnings are estimated to be around $5,003,100.

Nate Diaz will step into the Octagon for the last time against Khamzat Chimaev this weekend on September 10th as he goes for a five-round battle in the main event of UFC 279.