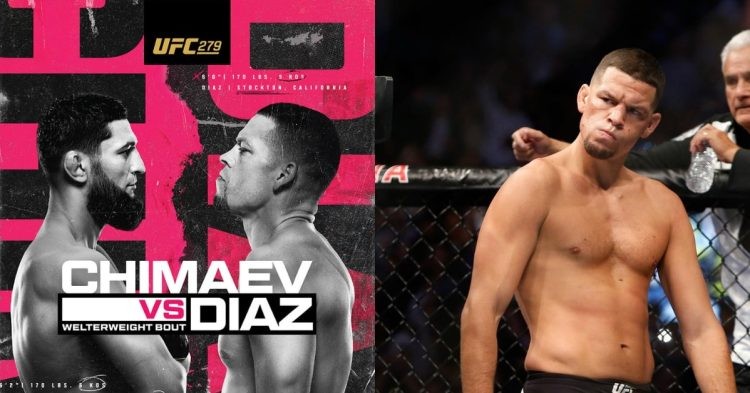 UFC 279 will feature one of the most highly-anticipated fights in recent memory. Former lightweight title challenger Nate Diaz will go up against Khamzat Chimaev in the main event of the upcoming PPV. The promotional wheels are already rolling for the fight and the hype is starting to build up.

The UFC released a promo for the event on August 23rd. It featured both Nate and Khamzat equally and highlighted their credentials. While Chimaev was painted as this unstoppable force, Nate was portrayed as an immovable object. Hence, it did a great job of letting the fans know where the fighters are in their careers.

But it did not appease Nate who thought that the promo did not do a good job of telling his side of the story. The Stockton native decided to put together a promotional piece himself and released it on his YouTube channel. The 81-second video opened with a voice-over of Bruce Buffer introducing him. It also featured some digs at Conor McGregor.

The video was extremely well edited and it did a fantastic job of letting the fans know why the 37-year-old was so special. Fans can watch the video below.

It seems like Nate Diaz’s 15-year association is set to end with UFC 279. The fighter has been an integral part of the company since winning The Ultimate Fighter in 2007. But the relationship has soured over the years and it is finally set to end on September 10th.

For fans who are unaware of the situation, Nate only has 1 fight left on his contract. He has been trying his best to fight out the current contract and is set to do exactly that against Khamzat. Although Nate was initially targetting a fight against Dustin Poirier, UFC booked him to fight The Borz.

It is evident from his interviews that Nate is not happy with the direction his career is going. He feels as if the promotion has wronged him many times in the past and Nate is eager to conquer a new challenge. Fighting Jake Paul in a boxing ring looks like it will be a lucrative option for him. It will give him the opportunity to earn the amount of money he feels he should,