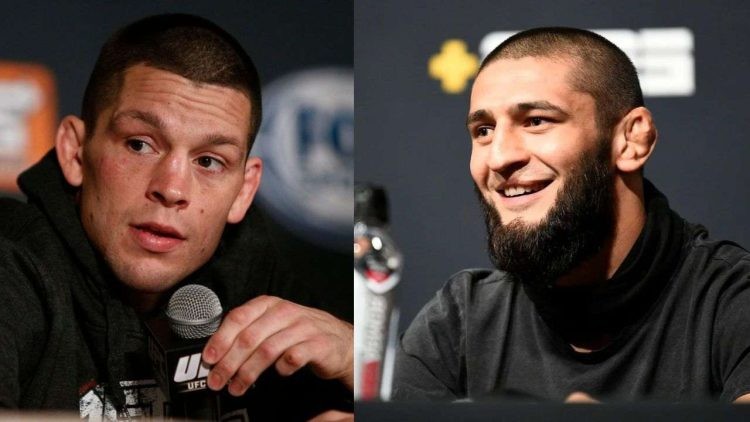 Khamzat Chimaev vs Nate Diaz Press Conference will be one fore the ages. (Credits: Twitter)

Khamzat Chimaev has been the center of attention this fight week. Promos, Interviews, Media, and even confrontations, ( thanks Paulo!) Khamzat is everywhere it seems.  With the Press Conference nearly at hand, it’s not long before the fans get to see Chimaev and Diaz take the stage.

Khamzat is notorious on the mic. Just take his antics against Li Jingliang and most recently, Gilbert Burns. He thrives off of the crowd’s energy and takes the hype to a different level with his enthusiasm. In addition to that, it also seems like Khamzat has been working on improving his spoken English as well.

I for one, absolutely cannot wait for the post-conference. In fact, every single fight fan feels that it cannot come sooner. Simply the thought of fighters like Chimaev, Diaz, Tony Ferguson, AND Kevin Holland on the same stage?! No wonder fans cannot keep calm.

The UFC 279 Press Conference will take place at the MGM Grand Garden Arena. Moreover, fans from around the world can tune in at any of UFC’s socials from 4 PM PT for a live broadcast of the event. Take it from us, you don’t want to miss this one.

Nate Diaz is a legend when it comes to interviews, media, and the press. Simply take his back and forth against Conor McGregor in the lead-up to their two fights. Fans just cannot help but back Diaz as he’s always been one to keep it real whether he’s in the Octagon or outside of it.

Khamzat also appears to be slowly following in Diaz’s footsteps by taking a page from his book. In his past two press conferences, Chimaev has garnered a lot of attention with his wild outbursts and notably when he corrected the Mandarin translator for Li Jingliang.

As admittedly a fan of Diaz, Chimaev is learning and applying a lot of what he has seen the Stockton Slugger do. In a way, Chimaev is almost following Diaz’s footsteps, ready to fight anyone, anywhere, and putting it all on the line every time he does it. Will we witness a potential passing of the torch on Saturday night? Only time will tell.