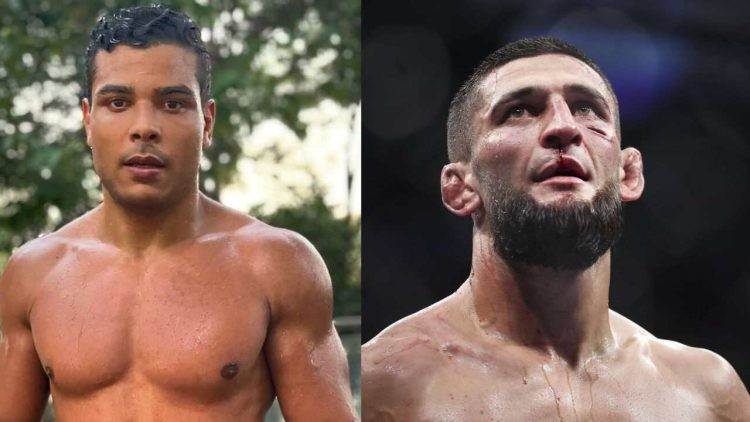 Paulo Costa is beginning to make a habit of grabbing the headlines lately. Most recently Costa took to Instagram to bash Khamzat Chimaev ahead of the latter’s fight at UFC 279. Khamzat takes on PPV superstar and welterweight Nate Diaz on Sep 11 at the T-Mobile Arena, Las Vegas, Nevada.

In his video, Costa is very clear about the fact that he does not like Chimaev. More specifically, he disagrees with ‘Borz’ saying that Nate Diaz is not a real gangster. ‘The Eraser’ also believes that despite the odds, Nate will in fact beat Khamzat when the two throw it down later this month.

Paulo says in the video, ” …Chimaev is not real gangster you know, Nate Diaz is real gangster. Chimaev is just a gourmet Chechen.” According to Costa, Khamzat only acts tough but is a very timid character outside the cage whereas Diaz is a gangster in and out of the cage.

” Nate Diaz will fuck him up, okay? I’m with Nate Diaz all day. All day, Nate Diaz,” adds the Brazilian. Although the odds are stacked against Diaz against Chimaev, Paulo still believes in the Stockton Slugger’s potential. Currently, the Swedish fighter sits pretty as a -1150 favorite according to the bookies.

Many believe that the UFC has done Nate Diaz dirty for his last fight. Diaz has rebelled against the organization for a while now leaving them no choice but to not renew his contract. Thus, the UFC matchmakers have paired the superstar with an absolute killer in Khamzat Chimaev to properly ‘retire’ him.

Will Paulo Costa face Khamzat Chimaev in the Future?

Khamzat Chimaev is currently on a tear in the UFC. His euphoric rise in the UFC has seen him become one of the most talked about characters in the sport. Following his recent victory against Gilbert Burns, the Swedish fighter has become a serious contender and is certainly on the fast track to the title.

On the other hand, Paulo Costa is slowly finding his way back to the top of the division. After a two-fight skid, many felt as though Paulo had lost his hunger and will to be a champion. However, following his victory against Luke Rockhold at UFC 278, it appears as though ‘The Eraser’ has once again discovered his true calling.

Since Chimaev fights at both Welterweight and Middleweight, a matchup against Costa could potentially happen. The rivalry is definitely there and if made to wait for a title shot, Khamzat could make the move up to 185. If this fight does happen, who are you backing to win it and how? Leave your thoughts in the comments below.