Nate Diaz’s Walkout Songs: List of Songs Nate Diaz Has Walked Out to in His UFC Career 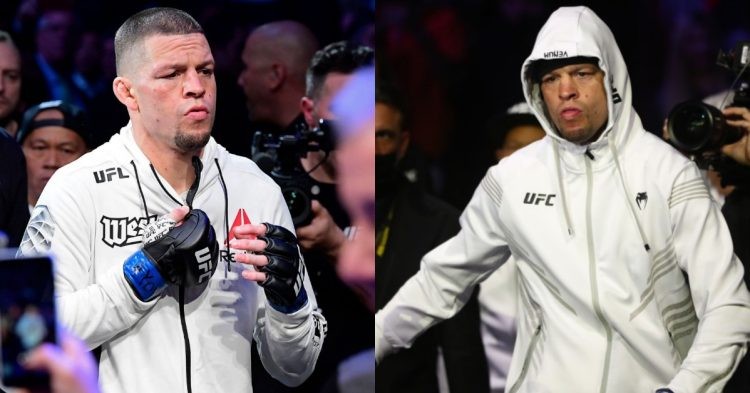 Nate Diaz is one of the biggest stars in the UFC. He is not only an elite fighter, but he is also a bonafide box-office draw. From fighting Conor McGregor and Leon Edwards in their prime to smoking marijuana during weigh-ins, Nate has developed an insane fan following over the years.

Despite performing at the highest level of the sport on a regular basis, Nate has not been the most active fighter recently. He has butted heads with the promotion on various issues over the years. The Diaz brothers have always stood up for the things that they felt were wrong. It is one of the many reasons why the fans connect with them so much.

Nate Diaz chose to walkout to Shelter by Rolling Stones for his walkout against Tony Ferguson at UFC 279.

Nate Diaz created history at UFC 263. His fight against Leon Edwards became the first in UFC history to have 5 rounds which were neither the main nor the co-main event. For the event, he chose to walk out a remix of 4 songs. He used ‘The Rain’ by DMX, ‘Used To’ by Lil Wayne ft. Drake, ‘Can’t C Me’ by Tupac and ‘Last Ones Left’ by Tupac.

The Way I am: Nate Diaz’s legendary walkout at UFC 244

The song is produced by the legendary rapper Eminem.  Nate used this in his last UFC fight against Masvidal at UFC 244 back in 2019. Since then he has been out of the octagon.

Nate walked out of this song when he fought at the co-main event of UFC 241 against Anthony Pettis. In addition to that, the younger Diaz later defeated his opponent via a Unanimous decision. Nate’s return was perfect and he called out Masvidal after winning over Pettis. The artist of the song is Carl Off.

This gangster walkout at UFC 202 is one of his fan’s favourites.  He fought the Notorious that night and lost by a majority decision. But, his fans still debate on the real winner.  The song was produced by famous music artist 2pac.

Nate conquered Conor in this fight.  Conor couldn’t absorb his rear-naked choke only in round 2. Being a 2pac fan he used one of his songs “don’t make enemies” for his entrance into the main event of UFC 196.

I am a soldier: UFC Fight Night, Henderson vs Diaz

Nate is a rap fan and this was again another Tupac song. Well, this was one of the best and biggest fights he ever fought. The lightweight title was in the line. His opponent Benson Henderson came out victorious in the bout.  The fight was back in 2012 at UFC in fox. This Nate Diaz Walkout was the best of all, in addition to that, his brother Nick cornering him was a great sight for the fight fans.