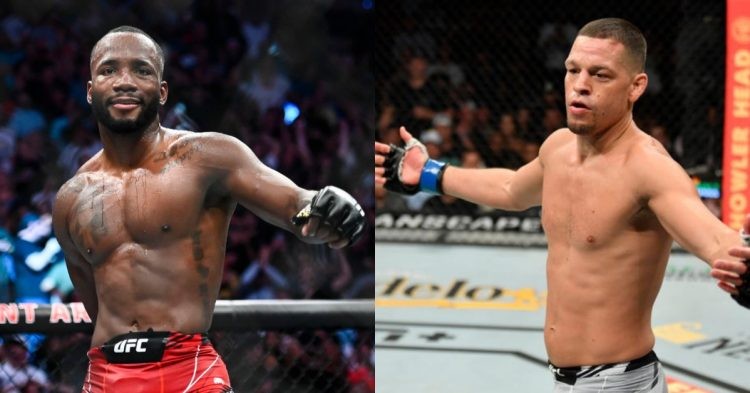 August 20th was a historic night as Leon Edwards defeated Kamaru Usman to become the new welterweight champ at UFC 278. The bout was fairly one-sided for the majority of it, but Leon did not give up and pulled off a magnificent head kick KO to win the bout. Although the fans expected Usman to get an immediate rematch, they should be surprised if Nate Diaz sneaks in!

Leon and Nate crossed paths at UFC 263 in 2021. Despite being neither the main nor the co-main event of the PPV, the bout between the two was a 5 rounder. Leon Edwards won the fight via unanimous decision as all 3 judges scored the bout 49-46 in favour of him. But, the most memorable moment of the bout came when Nate rocked ‘Rocky’ in the closing moments.

Although Nate could not finish him, it earned him a lot of respect from the MMA community and Leon was one of them. He recently appeared on ‘The MMA Hour’ hosted by Ariel Helwani. During their conversation, Ariel floated the idea of Nate getting a possible title shot in the future and Edwards seemed more than interested in it.

The younger Diaz brother is set to fight Khamzat Chimaev in the main event of UFC 279. Although Nate says that he is in the best shape of his life ahead of the fight, he is a massive underdog against Chimaev. But, it will be foolish to count him out as anything is possible in MMA; Edwards’ win over Usman is the biggest proof of that.

If Nate can get the job done against Khamzat, Leon is more than happy to face him for the title next.

“Oh imagine the scenes, the scenes… I’ll 100 per cent give Nate a shot at the title. The scenes would be crazy.” Leon continued, “I’ll 100 per cent give Nate a shot cause Nate is a G man. I’ve always said it, even after the fight (at UFC 263), he is who he is. One of the guys that, the game has never changed him. So if that does happen (Nate beats Khamzat), Nate’s definitely getting a shot.”

Will Nate Diaz re-sign with the UFC to fight Leon Edwards with a win at UFC 279?

Heading into the fight against Khamzat Chimaev at UFC 279, the biggest storyline is Nate’s contract situation. Diaz has been at odds with the UFC for a long time regarding many different issues. It will not be a stretch to call Nate a disgruntled employee. After repeated attempts to get a fight, he finally landed the bout against Khamzat on September 10th.

It is supposedly the last fight of his existing contract with the promotion and Nate is not interested in extending his deal. Diaz seems like he is burnt out with the sport of MMA and wants to explore new avenues. Nate fighting Jake Paul in the boxing ring has been heavily rumoured to be his next move. But the recent turn of events has created an interesting scenario.

A part of the offer to him may be a title shot against Leon Edwards. Now that the champ has expressed his interest in fighting the 37-year-old, the company may very well make it.

Nate and Leon already have a history together and their fight at UFC 263 ended on a very interesting note. So, the fans will definitely be interested in watching the rematch. By the virtue of beating Khamzat, Diaz will be the rightful no. 1 contender for the belt and the potential rematch will do massive business. So it is a win-win scenario for all the parties involved.