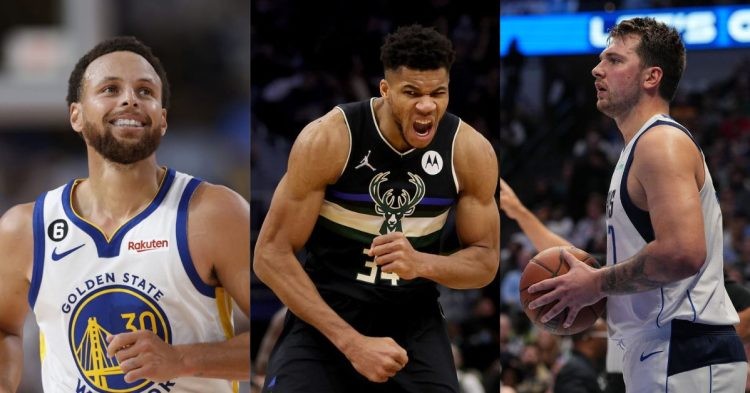 Stephen Curry of the Golden State Warriors, Giannis Antetokounmpo of the Milwaukee Bucks, and Luka Doncic of the Dallas Mavericks. (Picture credit - Twitter)

Players like Stephen Curry, Giannis, and Luka have hit the ground running this season. The 2022-23 NBA season has been off to a great start. It hasn’t even been a month since the season started and we’ve already had some amazing performances. Steph, Giannis, Luka, and Ja Morant in particular have been putting up some insane numbers so far.

The season has been full of surprises with plenty of breakout performances from young stars. The most surprising team so far has been the Blazers who have exceeded expectations and have started the season off with 5 wins and only 2 losses a lot of this can be credited to the amazing performances that Damian Lillard has put up.

But the season is still young and a lot can change in the months up ahead. Let’s have a look at the best players so far.

Stephen Curry has been as lethal as ever this season

Curry has been on a tear. He is having a career year so far averaging 30.0 points per game, 7.5 rebounds per game, and 6.5 assists per game.

We also got to see Steph record a rare triple-double against the Miami heat last night. Steph as a player has been amazing, but the same can’t be said for the Warriors as a team.

They have a record of 3 wins and 5 losses, if they can’t turn this situation around then Steph doesn’t have any real shot at the MVP

The Bucks led by Antetokounmpo is currently the only team in the NBA that is still undefeated. During this streak, Giannis has had some outrageous averages with 33.6 points, 12.7 rebounds, and 5.0 assists a night

Giannis is the clear favorite to win MVP this season if he can keep up his stats and the Bucks keep winning games.

Doncic has led his team to a record of 4 wins and 3 losses, and while doing so he has been putting up some insane numbers. Doncic is currently averaging 36.1 points, 8.8 rebounds, and 9.0 assists per game.

Luka Doncic will also end up as one of the favorites for this year’s MVP if he keeps posting insane stat lines like this.

A lot can change over the time that we get to the Playoffs. But as things stand right now these are the players that could very well take the MVP trophy home with them.