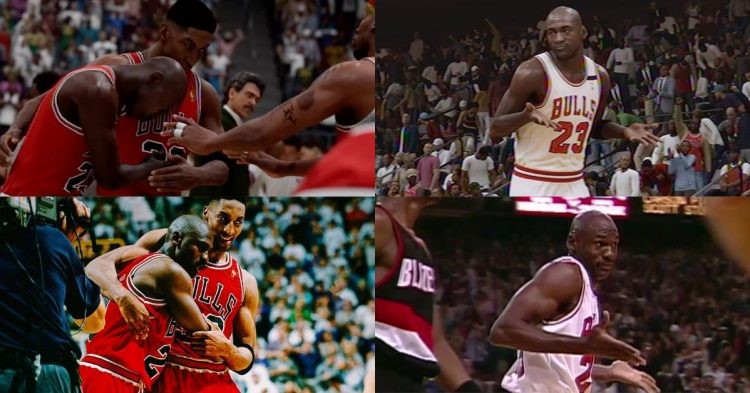 Michael Jordan is considered the greatest NBA player ever and revolutionized the league. The people loved everything about him from his attitude, to his skillsets, to his celebrations, and more. NBA 2K is a videogame series for PlayStation and Xbox. The latest version plans to have a realistic feature for Michael Jordan’s character.

Video games are quite graphic and detailed. Therefore, one must be curious what these latest updates are and how they compliment “His Airness“. After all, not all of us have access to the latest NBA 2K23 version. We should look closely at the features that could be considered tributes to MJ.

It has been two decades since Jordan retired from the league. Many of the newer fans of the sport are likely unaware of how dominant Mike was and how unstoppable he seemed in his prime. There were several moments throughout Jordan’s career that the NBA 2K creators decided to recreate in the game.

What does an iconic moment mean? Well, it depends on the situation and field clearly. For example, a teacher’s best moments might occur in a classroom setting during a point in a lecture perhaps. In the same way, an NBA great’s iconic moment is usually a celebration or an action at a point during or after winning a game.

We know Jordan was notorious for his trash talk and getting under the skin of his opponents. His iconic moments include the famous shrug and embracing Scotty Pippen. Fans today will not remember the context behind these moments. Therefore, they deserve a throwback, now that NBA 2K has included them in the latest version.

Michael embracing Pippen has quite a backstory. It was taken after Game 5 of the 1997 NBA Finals. The Chicago Bulls managed to defeat the Utah Jazz in a close 90-88 victory. Additionally, MJ had the flu during this game but scored 38 points, 7 rebounds, and 5 assists to give his team this win. Therefore, a completely exhausted Jordan hugging Scottie is an iconic moment captured.

Another iconic moment recorded in NBA 2K is Jordan’s “shoulder shrug“. This was during Game 1 of the 1992 NBA Finals. The Bulls were facing the Portland Trail Blazers and looking to repeat as NBA Champions. MJ knocked down 6 three-pointers in the first half of the game. He shrugged off this dominant display of shooting during the game and this moment is another one of Jordan’s great moments.

These are the two that NBA 2K will have in tribute to MJ. There are several other notable MJ moments such as the “finger wag” or the “closed eyes free throw“. We should wonder if these will be included at some point in the future.