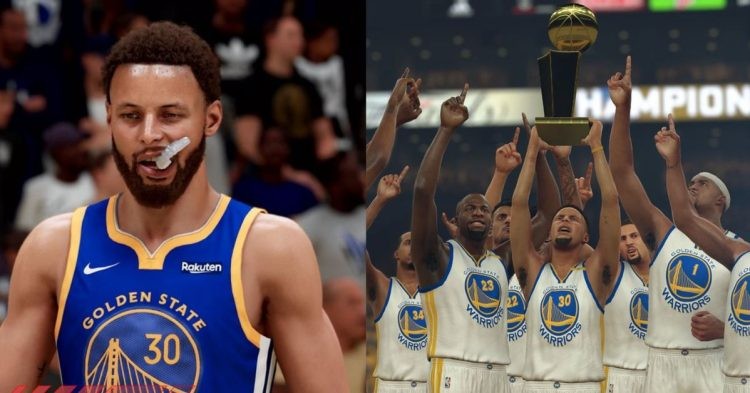 NBA 2K23 is the latest in a series of popular basketball video games. Its player ratings are said to be calculated based on the performance of the player the previous season. Stephen Curry, Klay Thompson, and the Golden State Warriors won the 2022 NBA title. However, a leak from a Twitter account, “2KIntel” reveal shows that both their ratings have been lowered to look somewhat average.

This makes no sense to many NBA fans. After all, Steph’s rating being reduced after his dominant performance in the finals makes no sense. If this is indeed true, one must wonder what their ratings are this year.

It seems even the Golden Boy of the NBA is not free of haters. Curry won his first Finals MVP this year. This was after the world thought the Warriors would never win another title. The same critics also claimed that the warriors had zero chances of winning an NBA title after losing in 2019.

People are quick to forget that Steph was injured several between 2019 and 2022. He broke his wrist on a bad collision with Aaron Baynes. Moreover, he also hurt his tailbone and had several ankle rolls and leg injuries. These were huge reasons the Warriors fell out of contention in the last 3 years. They also lost Kevin Durant, who was traded to the Nets, and Klay Thompson, who had a severe ACL injury.

Steph carried the Warriors this season and was even in the talks for MVP. However, more injuries reduced his chances of winning the award. This has also been a season where he won the NBA all-star game MVP.

The NBA 2K23 game makers seem to have given him a rating of 93. This is 3 points lower than what people expected. The average fan has no choice but to wonder whether the NBA2K game makers are taking quality input before coming to decisions. Curry won his 4th NBA title, the Finals MVP, the all-star game MVP, and also broke the record for most three-pointers ever made in NBA history.

This seems to be the worst time to reduce his rating and could draw severe criticism. Hopefully, the experience and features of this game will help Warriors fans overlook this sign of disrespect towards their star.