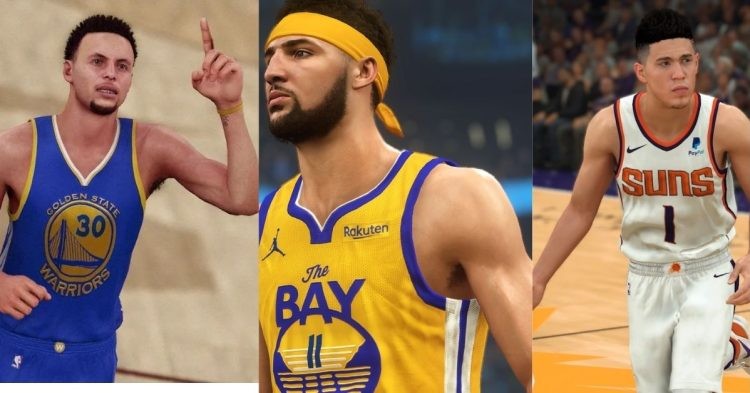 The NBA 2K23 series is not expected to be released until 9th September. Be that as it may, the internet ensures that nothing stays secret for too long. The ratings of several NBA stars have been leaked months in advance. Steph Curry, Klay Thompson, Draymond Green, and Devin Booker’s ratings have reached the public domain.

There is a certain ethical issue involved with releasing information, ruining marketing, and creating problems at a higher level in cases like these. One must wonder how this was even leaked in the first place. Nevertheless, it is important to know the ratings of these players as now public information.

NBA 2K23 has been tough with their ratings this year

It is simply not possible to put it in any other way. All the mentioned players’ ratings are lower than what they were the previous year. One must wonder how many others along with these athletes have had their ratings reduced for NBA 2K23.

Stephen Curry had a rating of 96 in NBA 2K22. Despite having a stellar season winning his 4th NBA title and first Finals MVP, it has been revealed that his rating has been reduced to 93 in 2K23. Klay Thompson’s was reduced drastically last year from the previous NBA 2K22. His OVR was 87 but was reduced to 83 towards the end. It is not expected to be above 80 OVR in NBA 2K23 Additionally, Draymond Green went down from 83 to 82. One must question the move of reducing the defending champions’ core’s rating.

So disrespectful to everyone especially Klay and Wiggins 👎👎👎 https://t.co/zvHAfD24yb

That is not even the most shocking piece of information revealed by the Twitter account “2KIntel“. Devin Booker of the Phoenix Suns is selected as a cover athlete for this year’s version of the game. Be that as it may, even his rating has taken a beating.

Devin was given a 91 OVR (overall rating) in 2021. One would expect that this number rise significantly if he is a cover athlete the following year. However, the leaked image reveals that his rating has been reduced to 89. Visually, this is a huge drop-off from the 90’s tier, despite being only 2 points lower. One must wonder why the NBA 2K owners would want Booker as a cover athlete but also decide to reduce his rating.

Thanks to the leak, Stephen Curry, Devin Booker, and a few others know their rating months before the game releases. NBA 2K23 is expected to release around September 9th, 2022 internationally.