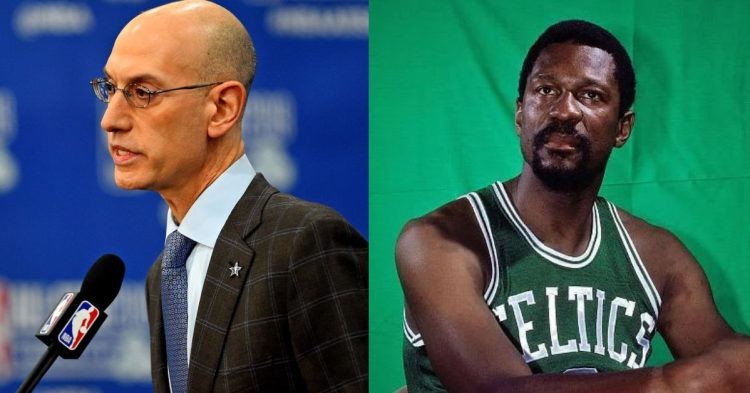 The NBA mourns the loss of a legend and icon of the game; Bill Russell. The 88-year-old passed away today after a life filled with triumphs and losses. Russell was the player with the most NBA Championships won. He had 11 rings to his name. Apart from his wins on the court, the former Boston Celtics superstar also won a Presidential Medal of Freedom.

The NBA Community has lost a leader of the game today. Bill was a symbol of everything the NBA stands for. The path he paved half a century ago still guides young players today and helps them become the players they need to be. Let’s have a look at how the biggest personalities in the league have reacted to Bill’s passing.

Adam Silver, and Stephen A. Smith, have reacted to the loss of Bill Russell

Very recently, NBA Commissioner Adam Silver released a statement. He said, “Bill stood for something much bigger than sports: the values of equality, respect, and inclusion that he stamped into the DNA of our league.”

Just like Silver said, Bill’s efforts to make equality a reality should not be ignored. He was also a civil rights activist that never backed down from fighting for what was right.

Stephen A. Smith also tweeted after learning about Bill’s passing. He said, “My deepest condolences to the family, loved ones and the NBA community on the loss of the greatest champion we’ve ever known: BILL RUSSELL.”

My deepest condolences to the family, loved ones and the @NBA community on the loss of the greatest champion we’ve ever known: BILL RUSSELL. An activist, a pioneer, a humanitarian. He made the world better for us all.#RIPCHAMPION

We all can agree on what Smith says, despite him being hard to agree with most of the time for many fans. Bill is the greatest champion in the history of the game and no one has come close to his achievements. Adding on, that’s not all that Smith tweeted.

He also mentioned, “An activist, a pioneer, a humanitarian. He made the world better for us all.” Russell had the future at the back of his mind.

When he fought for the civil rights movement, he knew that his struggle would benefit for generations to come, and it did. In addition to that, how he played the game and what he achieved also inspires the current generation and will continue to do so in the future.

Isaiah Thomas, the former Boston Celtics player, also tweeted on his page today. He said, “RIP Bill Russell” with a green leaf emoji at the end of his tweet. With Russell, Thomas has been one of the most influential players for the Celtics franchise in its history.

Apart from Thomas, Jayson Tatum has also tweeted about a player that knew his team completely. He said, “Thank you for everything! R.I.P Legend”.

Thank you for everything! R.I.P Legend 🙏🏽 pic.twitter.com/tn2iGsArav

We can’t be sure if Tatum is thanking Bill for his contribution to the Celtics franchise or the way he inspired everyone around him. That’s how you know how great of a man he was. Tatum’s teammate, Jaylen Brown has also given a tribute to Russell. He tweeted, “thank you for paving the way and inspiring so many Today is a sad day but also great day to celebrate his legacy and what he stood for”.

Like I mentioned earlier, young players know Russell and what he did back in the day. The last time he played was more than 50 years ago. Despite that, young players today recognize his greatness, which speaks at length about Bill Russell’s life.