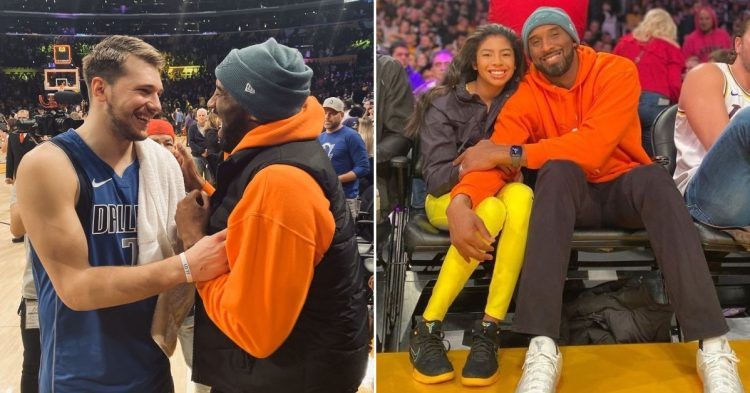 Kobe Bryant’s loss was a tough one for the world to take. We tragically lost nine lives, including Kobe and his daughter Giannia, to a horrific helicopter crash in 2020. We witnessed many famous personalities mourn the loss of a legend, and Dallas Mavericks superstar Luka Doncic was one of them.

He paid tribute to Kobe and Gigi, together with the rest of the victims, with a message on his shoes. Together with that, he posted a tweet and expressed his feelings on the incident too.

It was quite evident that Luka shared a special relationship with Kobe, after the former disclosed how Kobe’s death affected him. Luka said according to Eurohoops, “He was a lot. He and LeBron were for me the guys that I play basketball. I looked up to them and that’s why I got motivated to play basketball. It’s just really hard. I broke down after the first quarter. That’s when it really hit me. It was really hard to play today.”

LUKA on the heckling fan at the Lakers/Mavs game: “He was talking Slovenian. So I was like, ‘Who’s talking my language?’ I saw Kobe and was really surprised.” pic.twitter.com/5d0MdE67gc

Moreover, Doncic also mentioned that he remembered everything about Kobe. He proceeded, “Obviously that one time, a month ago at Staples Center. It was something special. Kobe knows me. It was something amazing.”

For those who don’t know, the last game that Kobe attended at the Staples Center was when the Lakers played against the Mavs (December 29, 2019). Doncic was also featured in that game. The Lakers took the win despite 19 points from Luka, along with 4 rebounds and 7 assists. The decent performance wasn’t what Luka remembered the most however.

During the game, Doncic heard slurs and trash talk from one of the individuals at the game. When he looked back to see it was, it was the the Black Mamba himself, swearing at Luka in Slovenian! It was an eye-opening day for the Mavs guard, as he did not expect the 5x NBA champ to know a young and upcoming player. Together with that, Kobe also had some advice for Luka, which has come true in recent times as well.

The relationship Kobe and Luka shared wasn’t an ordinary one. The latter admired Bryant for his career and attitude and looked up to him. Kobe on the other hand, wanted to help Luka to make sure he became the best version of himself, which was the Mamba Mentality was all about.