After several negotiations, NBA and NBPA reached an agreement to conduct the All-Star game this year as a single night event. The All-Star Game appeared to be a win-win situation for both parties until prominent NBA stars like LeBron James, Giannis Antetokounmpo, and Kevin Durant spoke against it.

NBA decided to go back to the classic East vs West system this year which means teams are more or less already decided as finals voting won’t be all that different. If the league is indeed successful in organizing the All-Star weekend, we will be able to watch LeBron James and Stephen Curry play together for the first time.

Nikola Jokic bumped from reserve to a starter so far in the vote count, and CJ McCollum is on pace to become All-Star for the first time in his career. In addition, Carmelo Anthony and Derrick Rose have made a comeback after several years of injuries and misfortune. While DeMar DeRozan and LaMarcus Aldrige slipped out of the list, younger players have taken their position.

Ja Morant, Zach Lavine, Zion Williamson, Christian Wood, Shai Gilgeous-Alexander, and Bam Adebayo are above veterans as fan favorites. And rightly as these youngsters are putting up huge numbers with big plays for their small-market teams. However, the most surprising player on the list was Klay Thompson. He has not played a game in over 2 years yet he is 10th in the guard position in the western conference. He was voted as an All-Star last year as well. 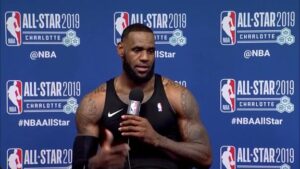 In these unprecedented times, NBA lost quite a lot in ad revenues, courtside tickets, and, fan-intensive All-Star weekend due to the coronavirus. However, players received their salary for the year 2020-21 in full despite the owners suffering huge losses. A shrunken season of 72-games was agreed upon to give players their usual summer offseason, unlike last year.

This has put several players under severe strain having to play back-to-back games without the option of load management. In addition, players have to follow the strenuous covid protocols for others’ safety. And despite going through all this, chances are their team may not even make it to the finals due to contact tracing sit-outs. This puts talented teams at a disadvantage, as is the case with Miami Heat and Dallas Mavericks.

This All-Star game could be a win-win situation for both parties as NBA could regain some of its lost revenue and winners could donate the money to historically black colleges in USA. However, NBA stars are reluctant to let go of their mid-season break for the sake of the All-Star Game.

“I have zero energy and zero excitement about an All-Star Game this year,”

“Zero energy and zero interest”@KingJames on playing in the All-Star Game. pic.twitter.com/yrVi6oedkF

“It is what it is. We all know why we’re playing it. It’s money on the line. It’s opportunity to make more money. Just putting money over health right now, pretty much.”

"It is what it is. We all know why we're playing it. It's money on the line. It's opportunity to make more money. Just putting money over health right now, pretty much."

Giannis Antetokounmpo on the other hand, said he would rather spend time with his family than play in the All-Star Game. Players have an option to opt-out, however if LeBron James, Kawhi Leonard, and Giannis Antekounmpo choose to sit-out the game will lose its meaning altogether.