All-Star weekend has long been the NBA season’s biggest attraction after the playoffs. A common stage with the league’s best players competing in various challenges? Entertainment redefined. The All-Star Game in particular is the highlight of the weekend. And in 2018, a format change was implemented to how the teams were decided for the game. And one player, in particular, has found great success in it, Lakers star LeBron James for Team LeBron.

In essence, the format change no longer pitted Eastern Conference players against Western Conference players. Rather, in an attempt to involve fans and players further, a draft would be held. Fan votes would count towards electing respective captains from each conference. These captains would participate in a draft to select from the pool of All-Star starters and reserves.

And ever the man of the moment, LeBron James has been elected captain in each of the 5 years since. His popularity on the global stage and on social media undoubtedly aided his cause. Including a remarkable turnaround in this year’s voting.

Stephen Curry’s form allowed him to comfortably lead the initial stages of fan voting before LeBron pulled back ahead to captain a team again in his hometown.

LeBron James has been 5-0 as a team captain

In the first edition of the new format, Team LeBron squared off against Team Steph at the Staples Center. And the then Cavaliers star rose to the occasion, leading his team by example.

LeBron recorded a double-double with 29 points scored and 10 rebounds collected. Although the 2 teams split the quarters won, it was Team Stephen that fell short by 3 points to lose the game.

LeBron James, however, marked the occasion with his third All-Star MVP award. Team LeBron went on to win each of the next 3 All-Star games, twice against Team Giannis and once against Team Durant.

This season’s All-Star game saw captain LeBron pick Stephen Curry for the duo to team up for only the second time. And the night belonged to Steph, and his legendary shooting. Steph scored 50 points and drained 16 3-pointers to win his first-ever All-Star MVP. 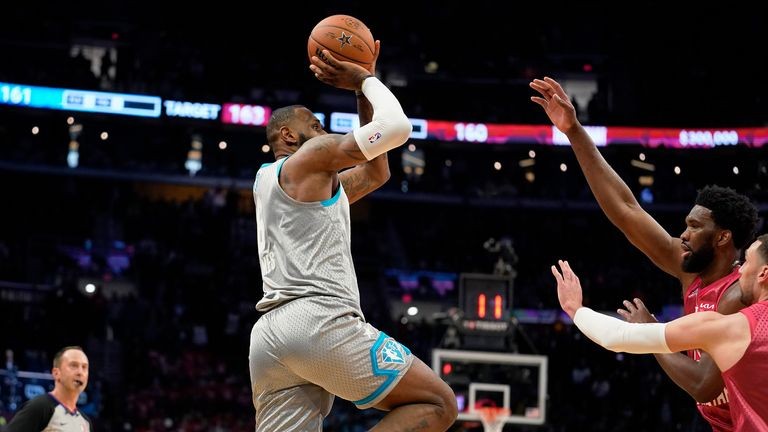 But fittingly, it was LeBron James who scored the game-winning shot that put Team LeBron up 163 to Team Durant’s 160. The returning hometown star had the final say in a game he continues to dominate at the age of 37.

LeBron is only behind Kareem Abdul-Jabbar (19) when it comes to All-Star appearances at 18 selections. He is poised to tie the record next season and subsequently take over it, barring any serious injury which keeps him out.