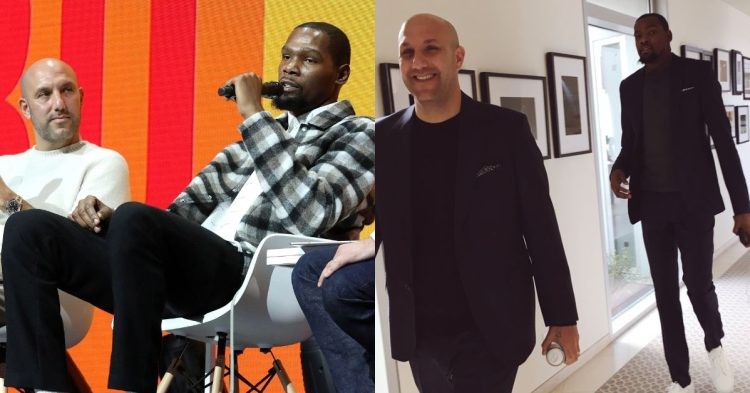 What is it with the NBA stars and having super agents named ‘Rich’? The sport of NBA basketball goes hand in hand with money and endorsement opportunities. Out of the best players currently in the NBA, most superstars are represented by the same names and agencies. However, for Kevin Durant, he found his lifetime agent and business partner, Rich Kleinman, through an unexpected friendship.

Kevin Durant has been in the NBA for 14 years and is still regarded as one of the best players. He has developed an amazing skill set for scoring which has helped him be successful throughout his career. KD is a 2 time NBA champion and finals MVP. He has also achieved 12 all-star teams and 10 All-NBA team selections. Unfortunately, he never really got the opportunity to be the best player in the NBA, shadowed by the constant success of Stephen Curry and LeBron James.

When did Kevin Durant sign Rich Kleinman as his agent?

Rich Kleinman and Kevin Durant first met after KD established himself in the NBA with his 2007-08 Rookie of the year award. It began through KD’s childhood friend and Kleinman’s position at Roc Nation.

“I was managing this artist, Wale from DC and Wale and Kevin had grown up together and Kevin was going to a Jay-Z concert at the Garden. He had just won Rookie of the Year and I’m a big hoop fan, so I knew who KD was. I think Kevin recognized that I knew basketball, and I think everyone knows that if you want to talk basketball with Kevin, he’ll talk to you.”

Rich found Kevin as someone who seemed unapproachable. But when given a chance, Durant worked well off of Kleinman’s energy. That experience may have prompted Durant to sign with Roc Nation just a couple of months later. And began a revolutionary relationship for his career and even the careers of many others.

KD and Rich make a ton of money through 35 ventures

In 2016, the year that Kevin Durant radically shook up the NBA by joining the Warriors, he also began ’35 ventures’ with his agent and friend Rich Kleinman. It’s been described as a multi-faceted sport, media, and entertainment company. They currently have their hand in multiple cookie jars. They have been able to make detailed analyses and investments in companies that are profit machines.

The biggest names in their roster are Coinbase, Postmates, SeatGeek, and Therabody. With Coinbase and WHOOP, they have made the most money so far. Kleinman and Durant’s friendship and business acumen can be directly credited to 35 Venture’s success. They used this comradery to even get into the cinematic space and have won an Academy award each through their ‘investments/production’ in movies, TV shows, and media.

“Before I met Rich, I had a lot of ideas about how I wanted to build my business and my foundation, but I didn’t have anyone around me really thinking in a long-term way. Rich understood my goals from the start.”

Kevin Durant’s relationship only seem to be getting stronger with his best friend. And that means his legacy on the court will not be the only thing that will be paying the bills in his house.