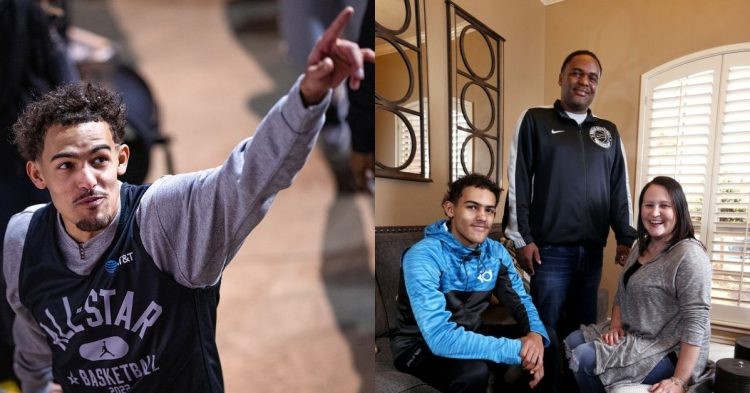 Trae Young is an NBA point guard who has spent his career with the Atlanta Hawks. His actual name is Rayford Trae Young and he was born in Lubbock, Texas. One must wonder about his father and what role he plays in the Hawks star’s life. After all, a father is an important figure in a person’s life and helps overcome obstacles.

A person’s parents are the ones held responsible for raising him/her into a productive member of society. Additionally, genetics and how a child is raised are crucial factors in the development of a human being. Therefore, knowing about the parents is a good way to understand their child. His father’s name is Rayford Young It would interest many to hear his father’s story as it is, in a way, the prologue to Trae Young’s life.

Rayford Young, much like Trae Young was a basketball player, just not in the NBA

As already mentioned, genetics plays a role in development, Luckily for Trae, his father was a basketball player when he was a child. Therefore, he was exposed to the sport from a very young age. Rayford Young played college basketball and was a star for Texas Tech.

Rayford was only 5’11 and went undrafted by the NBA despite averaging these efficient numbers. As a result, he took his talents overseas and played for other professional leagues in Italy, France, Portugal, and Spain. The most notable team he played for is called “FC Porto” in Portugal.

He soon stopped playing professionally after he had a family and Trae was born. He eventually entered the medical equipment business. Rayford worked as a graduate assistant and went on to get his Ph.D., This was how he was able to enter the medical business in the first place.

Trae clearly got his shooting genes from his father. Rayford averaged 11.7 points, 3.1 rebounds, and 2.1 assists. He shot 41% from the field and 38.5% from the free throw line with FC Porto. Shooting above 35% in any professional league from the three-point line is no small matter. His son has clearly taken this a step further and is averaging 25.3 points, 3.9 rebounds, and 9.1 assists in the NBA.