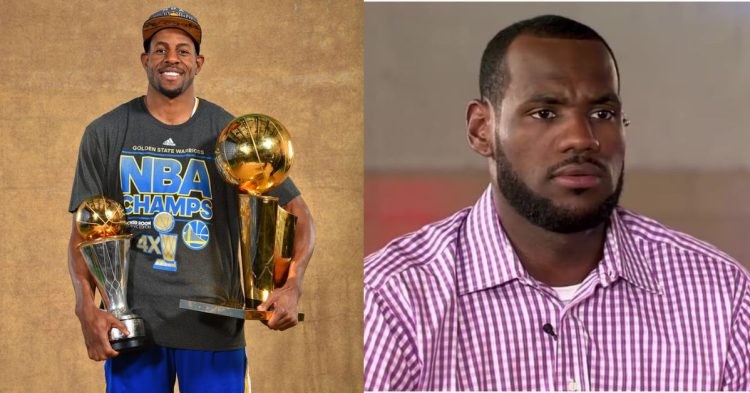 LeBron James is one of the most influential athletes on the planet. At 37 years old, he is still has a lot left in the tank. You may think he did not have the reputation of a superstar during his early career, but turns out he did. In 2010, LeBron announced on “The Decision” that he would be going to the Miami Heat instead of the Cleveland Cavaliers. However, one player who may have gone down the same path would be Andre Iguodala.

Iggy has been one of the most important players for the Golden State Warriors. In the 2004 NBA Draft, the Philadelphia 76ers picked him as the 9th overall pick. Since then, the player has been around for almost a decade. In his career, Andre has played 1,400 games(including playoffs), averaging 11.2 points, 4.9 rebounds and 4.1 assists per game.

Iguodala was never really a player that could lure eyes onto him the second fans saw him playing, but he knew how to get the job done on the court. However, he has caught the attention of many after addressing his retirement rumors.

Iguoadala does a podcast with Evan Turner called Point Forward. Recently, he said, “I’ve been hearing some chatter recently on decisions and things of that nature. This will be the home of ‘The Decision.’ Is that trademarked? The Decision? Cause people suing people nowadays ain’t they? I see Billy Hunter, he’s suing over a hockey story, he’s suing LeBron and Drake.”

.@andre has been “hearing the chatter” recently, so he wants to share some info. #NBATwitter

Before talking about his future, the GSW star mentioned that Billy Hunter was suing LeBron James and Drake. For context, the world-famous personalities are being sued for $10 million for the rights to their hockey documentary.

The 38-year-old is one of the unsung heroes of the Warriors team. We all know the trio of Steph Curry, Klay Thompson and Draymond Green have been pivotal for the team. However, Iggy’s leadership and volatile presence on the court helped him to even win the 2015 Finals MVP ahead of his teammate Steph. It’ll be intriguing for the NBA world to see if he returns to the court one last time.