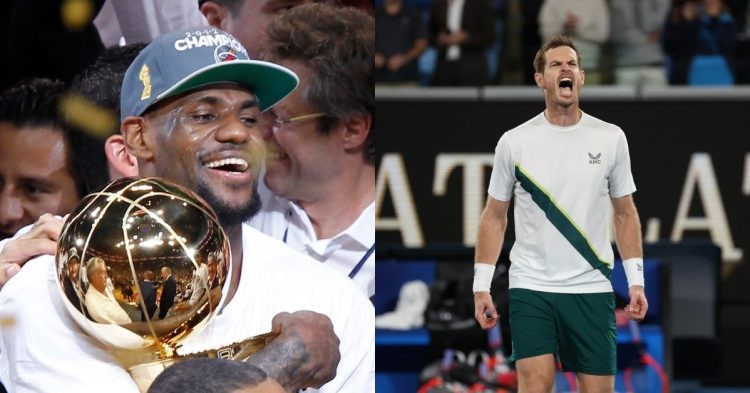 Former British No.1 and World No.1 Andy Murray has had a great career, which is hampered by his injuries. However, he is one of the most successful players in tennis. Andy didn’t get his hands on the title in a straightforward manner, but rather a difficult task. He compares himself to Los Angeles Lakers superstar LeBron James.

Just like Andy, When LeBron was drafted by the Cleveland Cavaliers in 2003. It took him 9 years to get his hands on the then Larry O’Brien NBA finals trophy. He eventually won 4 trophies during his career and won it for the Cavaliers as well, his home.

On This Day: In 2012 LeBron James won his first NBA Championship 👑

Will he guide the Lakers to the title next season? 🏆 pic.twitter.com/gDObBsQBXp

“There were a lot of people who said LeBron would never win.That he never played his best in finals and that in the fourth quarter of games, he never stepped up,” said Andy on the critics, who ruled out LeBron winning a title.

Many said Andy would never win a Grand Slam in his career, after losses in the finals. Andy lost many finals on his way to his first Grand Slam, one of the heartbreaking losses was the 2012 Wimbledon. Murray lost to Roger Federer at Wimbledon but sought revenge at the London Olympics.

In July 2012, Murray won his first-ever Grand Slam title against Novak Djokovic at the U.S. Open. It was the first time a British player won a Grand Slam after Fred Perry, 77 years later.

How many Grand Slams has Andy Murray won in his career?

The Scot has earned his place in the history books as one of the greatest male players in the Open Era. He is the holder of 3 Grand Slam Titles, 5 Australian Opens, 2 Wimbledon, 1 French Open, 1 U.S. Open, and an Olympic gold medalist for Great Britain at the 2012 London, and 2016 Rio De Janeiro Olympics. His first Grand Slam Title came with a historic performance, with a complete sweep against Novak Djokovic.

Andy has achieved all there is to be achieved in the sport of tennis, and is also a former world No. 1. Despite all the success he has had, his playing career has been injury plagued. It has been a long road back to tennis for Andy who underwent hip surgery in 2019. It was even a chance to never see him back at the top level, but Murray is proving the doubters wrong and is back in the game.