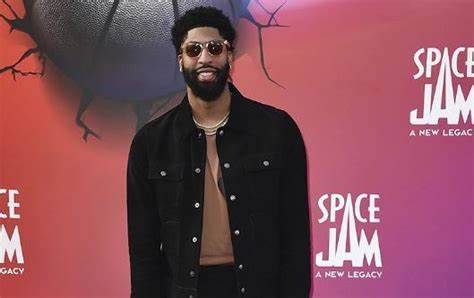 Anthony Davis attended the red carpet for the premiere of the new movie, Space Jam: A New Legacy. The movie stars, LeBron James as the lead with Anthony Davis, Damian Lillard and even Klay Thompson playing the role of the villain team in the Movie. The red carpet was filled with stars and a lot of fun interviews. When Anthony Davis hit the press section of the carpet he asked a very famous question. Davis was asked to give us his choice as to who he thought was the GOAT of the NBA.

Anthony Davis and LeBron James are the star duo who have taken the Los Angeles Lakers to a championship in 2020. The two superstars have amazing chemistry on the court. They have now taken their chemistry to the big screen, but this time they play against each other.

During the red carpet interviews, Anthony Davis was asked the one question that the entire NBA still debates. Jordan or LeBron? a debate that has gone on for years. AD was quick to choose the six-time NBA champion over his Los Angeles Lakers teammate, LeBron James.

The debate about who should be crowned the GOAT has been a long-standing topic in the league. LeBron James has been deemed as the Chosen One. A lot of analysts and fans have been wondering if King James would eventually break MJ’s records. King James grew up idolizing Michael Jordan. He dressed like him, wore his shoes and even studied his playstyle.

LeBron also wore the number 23 because his favourite star wore it. Will LeBron pass Jordan, only time will tell. But as of right now, Michael Jordan is the undisputed GOAT of the NBA.

Also Read: Here are all the Cover Athletes for NBA 2k22?