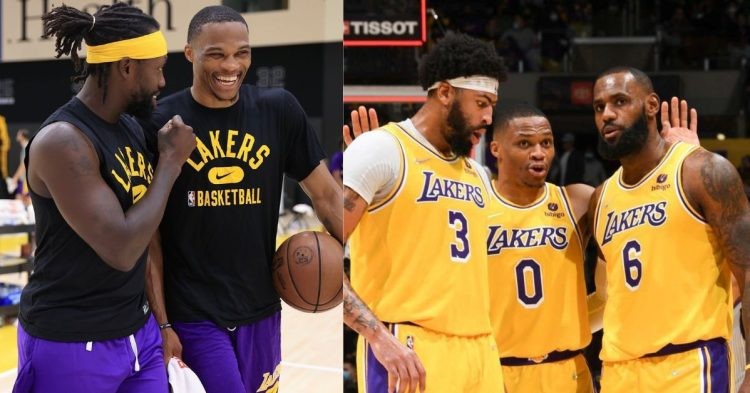 The LA Lakers are currently in the middle of a rebuild. After missing the playoffs in two consecutive seasons, the Lakers franchise are looking to get back on track. They are one of the biggest NBA teams, with the most championships (17) too. But it hasn’t looked like that lately. They have struggled to get past teams even with the likes of LeBron James, Anthony Davis and Russell Westbrook on their roster.

Last season, the LA-based franchise finished 11th in the Western Conference standings. They ended the season with the record of 33-49. It was then when the Buss family decided to sack Frank Vogel to hire the new head coach Darvin Ham.

Ahead of the new season, Anthony Davis has revealed something that has caught the attention of many. He told ESPN, “We’re treating this season like we have a chip on our shoulder,” Davis said. “We’re the underdogs. Obviously, the world is looking to see what we do, but they’re not talking about us, and that’s fine. You know, we’d rather be under the radar.”

Anthony Davis on the Lakers:

During the offseason, the Lakers acquired Patrick Beverley’s services. Initially, that did not seem like a good idea at all. The reason for that would be mainly his rivalry with Russell Westbrook. However, it seems like the pair have put behind all the differences now. Despite that, the Lakers making it work is still highly unlikely.

Even if Darvin Ham fails to make the chemistry work, they still have a talented roster. With LeBron, AD and Russ, that’s a big three every team in the NBA would want to have. If you add Pat Bev to that mix you get a lineup that can win you games everyday of the week.

In the 2021-22 NBA season, King James averaged 30.3 points, 8.2 rebounds and 6.2 assists. As for AD, he made 23.2 points, 9.9 rebounds and 3.1 assists in just 40 games. The center missed a significant number of games for the Lakers due to multiple injuries. Hence, Davis claiming that they are the underdogs really makes us scratch our heads.

If we think about it, AD might have a reason to do so. The Lakers have not been in the playoffs in the last two seasons. And it seems like no one expecting them to go far this year as well. The common opinion among fans is that LeBron is going to end up ‘carrying’ the game and AD will have a hard time with injuries again, with Russ and Pat struggling to make the chemistry work.

The only way they can prove their doubters wrong is if they learn to complement each other on the team. AD would have to step up for the team in the absence of LeBron, since the 37-year-old may not be playing every game. With the right strategy, they have a good chance of winning the title with Westbrook and Beverley also making notable contributions.