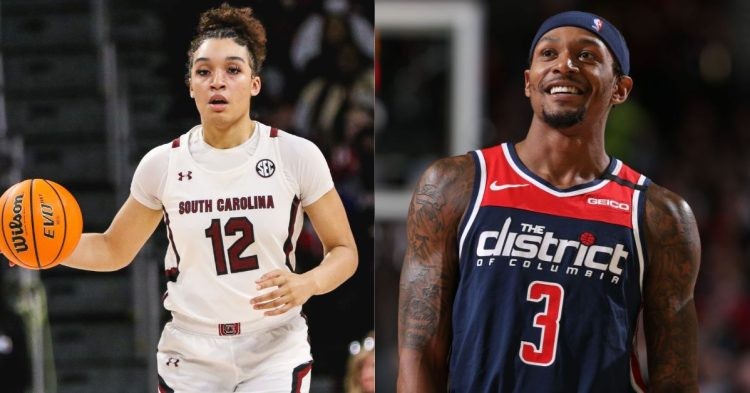 Bradley Beal is an NBA star currently with the Washington Wizards. He has been in the NBA for 10 years now and was drafted in 2012. Beal has remained loyal to the Wizards and has not changed teams in the decade he has been in the league. Brea Beal is an upcoming name in the basketball world. She is expected to become a part of the WNBA in the near future.

There are clearly eerie similarities between Bradley Beal’s and Brea’s names. Additionally, both of them are also in the same field of sport. Therefore, one must wonder whether there is a connection between these two personalities and whether they are related to each other.

Bradley Beal and Brea are not related, but she would fit right in

Brea Beal is unknown to many basketball fans at the moment. She is a college-level basketball player at the moment and is from North Carolina university. The women’s basketball team for this institution is called “The South Carolina Gamecocks“. She has seen quite a lot of success at collegiate level basketball. Moreover, she has helped her team reach the final four of the 2021 NCAA tournament.

Brea is known for her defensive awareness and tenacity. Those are also reasons she was considered a five-star recruit coming out of high school. She has been averaging 6 points, 5 rebounds, and 1.3 assists in college. However, she has barely been shooting 40% from the field and 30% from the three-point line.

Bradley is arguably the best player in the Washington Wizards. His playstyle and scoring prowess are forces to be reckoned with. He is also an inspiration to many on and off the court.

An interesting fact about Beal could be the way his family members are named. All their names begin with the letter “B” to follow their surname, Beal.

The Wizards guard has 4 siblings. Their names are Brandon, Bryon, Byron, and Bruce. Therefore, it is quite possible for Brea to be mistaken as part of the superstar’s family. However, her father Kevin Beal has not related to Bradley’s family. Brea’s father passing his name to his daughter is the reason she shares the NBA star’s surname.