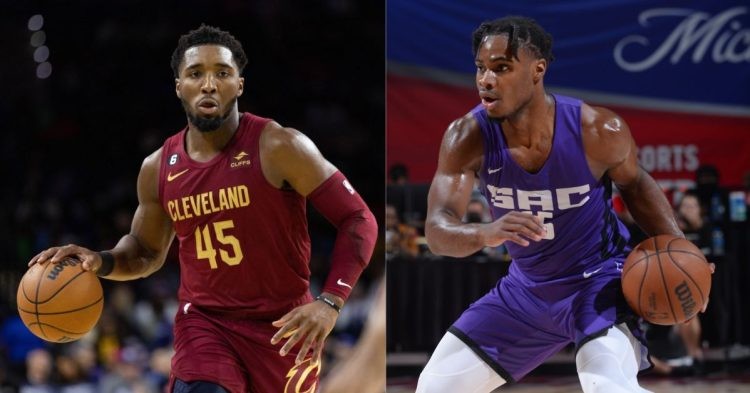 The NBA has witnessed many brothers and cousins play together, even for opposing teams. The biggest example would be the NBA champion Stephen Curry, and his younger brother Seth Curry, who plays for the Brooklyn Nets. Another pair that share the same last name would be Donovan Mitchell and Davion Mitchell.

Donovan will play for the Cleveland Cavaliers in the 2022-23 NBA season after moving from the Utah Jazz in a last-minute trade. As for Davion, he currently plays for the Sacramento Kings in the NBA. The franchise drafted him as the 9th overall pick in the 2021 NBA Draft. The fact that he shares the same last name as Donovan has brought the question of whether they are related.

Despite having the same initials and last name, it turns out that the two NBA players are not related to each other in any way. Another interesting fact about the Mitchells is that their birthdays are only two days apart. Davion’s birthday is on the 5th of September and Donovan’s is on the 7th.

Donovan has faced Davion four times in his NBA career. All of which happened during his time with the Utah Jazz. According to statmuse, he averaged 28.5 points, 5.8 rebounds, and 5.3 assists in these games, helping the Jazz take the win in all of them.

Both the players play the same position most of the time, either as a point guard or a shooting guard. Donovan has also represented Davion in his Baylor Bears jersey when the latter played college basketball.

Donovan Mitchell on Davion: “He is as advertised…”

Said it was the most physical he’s seen the Kings play since entering the league. pic.twitter.com/UJMrd6IyZN

Donovan has publicly praised Davion in the past. Last year, when their teams faced each other, he said, “He is as advertised. He’s physical, he’s quick, he does a lot of solid things defensively that disrupted not only myself but a lot of us. He set the tone defensively.”

Davion has already become a starter for the Kings as he played 75 games during the regular-season in 21-22. The young player averaged 11.5 points, 4.2 assists and 2.2 rebounds in his rookie season. As the Spida mentioned, he has been a solid defensive unit for the Kings at the back and only seems to be improving. As for Donovan, all the eyes will be on him after he moved to the Cavaliers this summer.