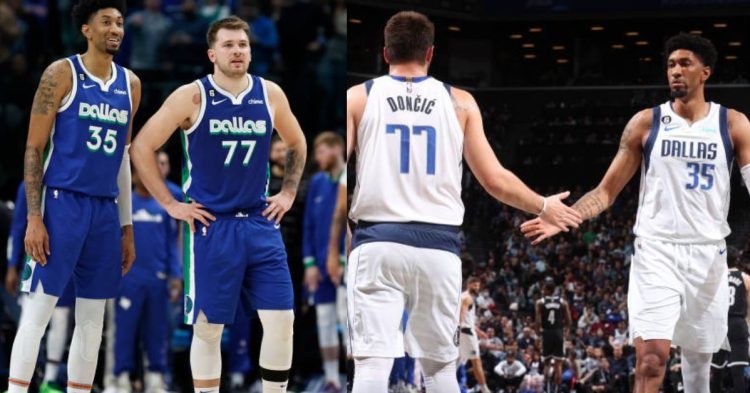 Luka Doncic, one of the rising future stars of the NBA is proving to be quite a dominant player on the court. Apart from this rumors of his friendship with the Dallas Mavericks’ new center Christian Wood is currently all over.

From their on-court yelling to their dad jokes, the duo have now become good friends. During a post-game interview, Luka talks about Woods’s sense of humor and their dad jokes.

Luka Doncic on Christian Wood’s sense of humor: “He has no sense of humor. I have way more. I tell him my jokes. My jokes are great, so he’s learning from me. You should ask him.”

According to Luka, their friendship formed based on the ability to listen and improve together which lacks between players. Apart from this, the two have always been seen praising each other’s play in every game.  With the Mavericks’ 103-100 win over the Utah Jazz on Wednesday night Luka praised Wood on his game.

“He’s an amazing player. I told him last game we gotta use him more, and that’s on me. I think we used him a lot more in this game against the Jazz. He shows what he can do. He was amazing today, and we just gotta feed him the ball more.” – he said.

How have Luka Doncic and Christian Wood performed together for the Dallas Mavericks?

For a long time, the Mavericks have been on the lookout for an additional scorer to play along with Luka. With Wood’s draft in Dallas Mavericks, his underrated handle and ability to score off the bounce have been quite an advantage for the team. When the two Mavericks players shared the floor, they produced 123.1 offensive and 109.9 defensive ratings, resulting in a 13.2 net rating.

The duo is achieving these results despite playing 186 minutes together, which ranks sixth among two-man combos with Doncic. As they spend more time on the court together, there will be many options for them to add to their half-court attack.

Although it has not been much time since Wood’s draft to the Mavericks, the duo’s on-court chemistry has made the Mavericks’ midseason run-up in the Western Conference standings.

However, their friendship appears to be like ice cream and fudge as both seem to be great players on their own.