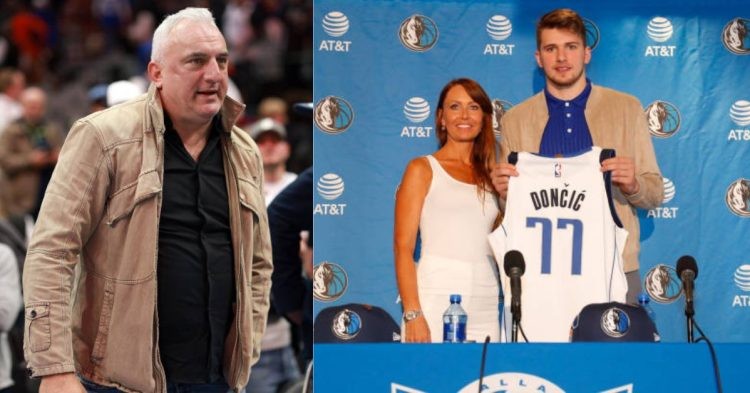 Sasa Doncic, father of Luka Doncic, beside Luka with his mother Mirjam Poterbin in the launch of LD7. (Credit- Getty Images)

Luka Doncic‘s NBA career has achieved great heights from the start. He is leading Dallas Mavericks single-handedly toward wins and is proving to be a future NBA star. Born and raised in Ljubljana, the Slovenian basketball player is the son of Mirjam Poterbin and Sasa Doncic.

However, her mother single-handedly supported her son’s career in basketball. As she didn’t have any knowledge of the game she fully supported him and looked after his other things. Despite being unknown of the game, she continued to work hard as a model and beautician for her son.

Born and raised in Ljubljana, Mirjam Poterbin is a Slovenian beautician, entrepreneur, and philanthropist. Before giving birth to Luka she was a former model who participated in the Miss Slovenia pageant in 1993. Apart from this she along with blogger Sara Zavernik was the face of a beauty and health clinic named Juventina.

After moving with her son to the United States, she started working in beauty salons, teaching women the uses and techniques of permanent makeup. Following this, she became a representative and a member of the board for the charity foundation ‘Ustuna we come true dreams’.

She is also the owner of the company ‘Luka Doncic 7’, which markets products in his son’s name. However, currently, she is in a legal battle with her son, for taking over the trademark of LD7.

Luka Doncic is in a legal battle with his own mother.

The Mavs all-star gave Mirjam Poterbin permission to register his name as a trademark in 2018.

Now, Doncic has filed a petition to cancel the “LUKA DONCIC 7” trademark, which his mother has refused to give up. pic.twitter.com/b8nksRDlTA

However, on the other hand, Saša Dončić, born on 14 June 1974 in Šempeter pri Gorica, Slovenia, is a former basketball player who played as a defender. He started his training in Jesenice following which he played in 3 towns in Slovenia Ilirija, Postojna, and Idrija. In 1996 he played at Pivovarna Laško and also in Krka, Slovan, and Olimpija.

Later in 2010, he became the basketball coach of the Škofja Loka team but was later replaced by the Slovenian B national team. According to sources, before working as a coach he worked in the catering business and even drove a taxi for a while. Also in 2017, his long-term relationship with Nikolina Dragičević led to the birth of their daughter Tijana. At the same time, Mirjam Poterbin was also in a five-year relationship with Boris Požeg – Pixi.

However, apart from their personal life, Luka’s parents proved to be quite supportive of their son’s career in basketball.