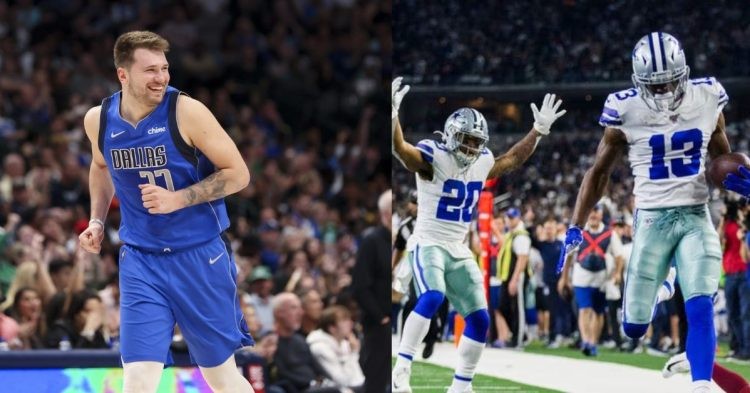 Luka Doncic is capturing hearts from all over and is no doubt a serious candidate for this season’s MVP. Luka joined the Dallas-based franchise in 2018 and has embraced the culture of Texas. He is the most popular name around Dallas. This said, with him embracing the culture and the new environment, he is an avid supporter of the Dallas Cowboys since joining the Mavericks.

Doncic is a legitimate Cowboys fan and is often seen placing bets and posting photos on social media. He often attends the Cowboys’ home games. However, he is not a fan of the Cowboys just because he lives in the area. Doncic was invited over for a game by the Cowboys owner Jerry Jones, for the Dallas Cowboys vs New York Giants.

Luka is a proud supporter of the Cowboys and is often seen wearing the Cowboys’ clothing during training. Doncic, since his arrival has transformed the Mavericks and is in electric form with them. He is leading the way for the scoring title, averaging 33.6 points. Luka has gained the trust of the state and Dallas-based fans all around.

Why are the Dallas Cowboys Luka Doncic’s favorite team?

Many sports fans often follow teams and players without knowing much about them and the sport. However, Luka didn’t start showing support for the Cowboys, just for the sake of his connections with basketball in Dallas. According to Dallas Morning News, “I just started watching games,” said Luka “It was just great to learn all the rules. I Googled it, too, so it was really fun to know the sport now.”

He rose to stardom with the Mavs and the love he received from the fans made a real connection. It was only natural for Luka to fall in love with the Cowboys. Since watching his first-ever game, Luka has Tweeted more than 30 times in support of the Cowboys.

“I told him about Cowboys…how we beat the Eagles.”

During his interview after dropping a historic triple-double, he mentioned the Cowboys’ win over the Philadelphia Eagles. The Cowboys will now be going into the postseason after clinching a Wild Card entry against the Tampa Bay Buccaneers.