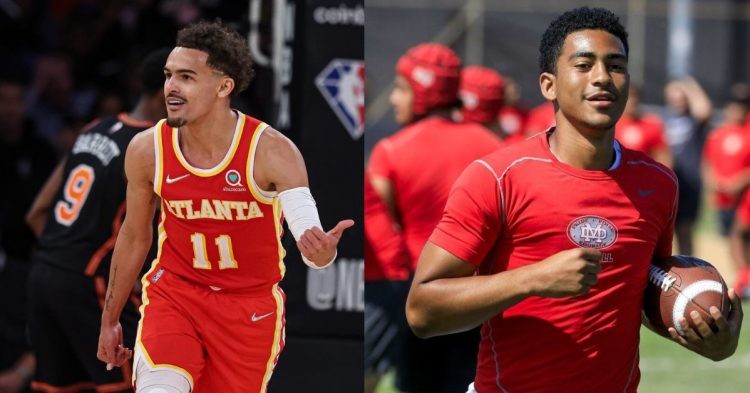 Trae Young is an NBA star for the Atlanta Hawks. He is a  point guard with incredible shooting skills. He has made the Hawks relevant again since joining the team. Bryce Young is an American Football quarterback for the Alabama Crimson Tide. Considering that they share the same last name, one must wonder if these two players are related to each other.

Trae Young and Bryce Young are not related to each other

NBA star Trae Young and American Football quarterback Bryce Young are not related to each other. Trae was born in Lubbock, Texas. He studied at the University of Oklahoma and played college basketball for the Oklahoma Sooners.

Trae was drafted into the NBA in 2018 and has become a cornerstone of the Hawks franchise. He has been averaging 25 points, 3.9 rebounds, and 9.1 assists. Moreover, he has been shooting 44% from the field and 35% from the three-point line.

Trae is a 2X all-star player in the NBA and a man in his own rights. Be that as it may, he has no connection to “the other young”.

Bryce Young was born in Philadelphia and is most well known for holding a record for most passing yards in a single game by an Alabama quarterback. It is important to note that Bryce is still playing for college and is yet to make the NFL. (National Football league)

Bryce is also significantly heavier than Trae as he weighs 88 kilos to Trae’s 74 kilos. Another reason both these players may be confused as related to each other is that they both share similar skin tones. However, beyond this and an identical last name, they really do not have anything else in common.

Trae is part of the NBA. Bryce will hope to join the NFL one day and already has a successful college football career. These two athletes may not be related to each other. However, there is no arguing that both Young are incredible young athletes who look to dominate their chosen sports.