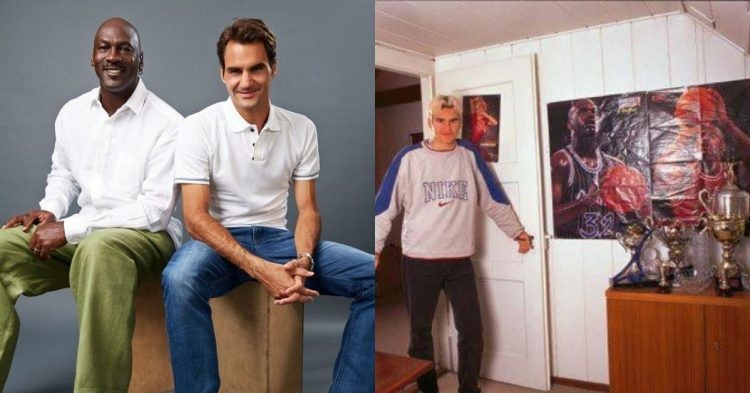 Michael Jordan is one of the greatest athletes of all time. Apart from the 6 NBA championships he has won with the Chicago Bulls, his impact on sports has been enormous. The way Jordan has inspired millions of people all around the world is truly sensational.

Many idolize the basketball legend, but it turns out that even icons of other sports do the same as well. It is none other than the tennis legend Roger Federer. The Swiss player used to have posters of Michael Jordan in his room when he was just a young player.

Apart from MJ, Roger also had images of Shaquille O’Neal, another legendary NBA player. Together with them, it seems like he was also a fan of the world-famous Baywatch actress, Pamela Anderson.

A 17-year-old Roger Federer with pin-ups of Shaq, Jordan and Pamela Anderson in his bedroom in Basel. pic.twitter.com/fixr6mTsrG

We all have our role models in the sporting world, and it seems like Jordan and Shaq were Federer’s. The interesting fact to note is that the image of Shaq was when he was with the Orlando Magic. He left the franchise to join the LA Lakers in 1996. According to reports, the image of Roger was taken in 1998, before Shaq had won any titles in his career.

It shows how influential Shaquille O’Neal was at the time, mainly from the fact that Roger became a fan even before the former had won any major accolade. On the other hand, 1998 was when Michael Jordan was at his peak. That was the time when he won his last NBA title with the Bulls. In addition to that, the title was also the last of the second 3-peat that His Airness won.

From having images of Jordan in his room, Federer went on to sit next to him. In 2014, the pair met for Nike. It was the time of the US Open and when Air Jordan 3 was about to be released. That year, Jordan also attended a game when Federer played against Marinko Matosevic. He also revealed, “you never really, understand how smooth and how relaxed and how fundamentally sound that he can make this game, he’ll make it look.”

Roger may have been a fan of Pamela Anderson, Michael Jordan and Shaquille O’Neal. All of these individuals were stars in their respective fields at that time. And it is safe to say that they surely inspired Roger he became arguably the greatest player of all time in his sport as well.